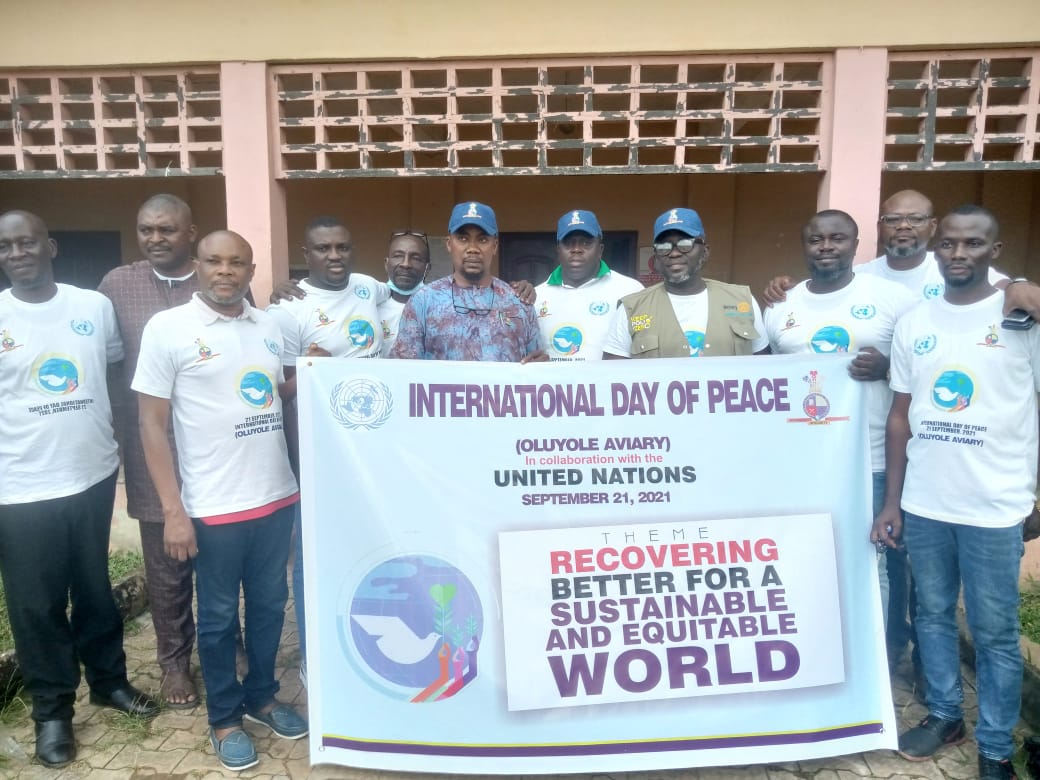 As part of joint efforts to commemorate the year 2021 World Peace Day, the Oyo State Government in collaboration with the Oluyole chapter of Aviary Club and the United Nations have all advocated for forgiveness and genuine reconciliation among Nigerians, reduced social discrimination and promotion of peace and peaceful coexistence.

Aviary Association  of Nigeria is a worldwide registered not for profit organization with headquarters in Nigeria. It was formally birthed in 1996 with an idea that crystallized from sustained higher institutions friendship of brotherhood among like minded people across Nigerian campuses to a philanthropic club as well as an advocacy organization that speaks against socio-political injustices across the world.

Speaking with journalists at the 2021 World’s Peace Day held at the Western Hall, Oyo State Secretariat, Ibadan on Tuesday Sept 21, the Special Assistant on Community Relations to Oyo state Governor, Honourable Olufemi Josiah, who represented the state government maintained that there can not be real peace in the absence of justice.

The governor’s aide said it is expected in any violence ridden state or country in the world that peace should be maintained for at least 24 hours as a commemoration of the global peace day which is celebrated annually across all countries of the world.

He attributed three key factors militating against achieving sustainable peace in any society which according to him include social justice, distributive justice, and procedural justice which he said can guarantee fairness and equity.

He added that the Seyi Makinde led government is already addressing the stated injustices via correction of systemic flaws by creating equal access to quality and freee ducation for all regardless of social or economic status.

“I want to use this opportunity to tell all residents of Oyo state and Nigerians as a whole that while we are pursuing peace, we should equally pursue justice. Social justice, distributive justice, procedural justice such that there will be fairness and equity tailored towards achieving lasting peace. At the same time we should not forget that while we are preaching peace, we should also preach forgiveness because if there is no forgiveness there can be no true reconciliation.” Josiah stated.

The former Oyo Assembly lawmaker said the approach to governance by the present administration by creating a level playing ground where job opportunities and promotion of workers are given based strictly on merit and not based on knowing someone that could abuse the laid down fair process by the Makinde led government in its commitment towards creating equal access and opportunity for all.

“The Government of Oyo state under the leadership of Governor Seyi Makinde has actually started addressing those stated areas because we as a government believe in social justice that is why Governor Makinde has created free and quality education for all. If every child has equal access to sound education then we have provided a level playing ground for every child to aspire for greatness and pathway to achieving their full potentials.

“At the same time Seyi Makinde is seriously promoting procedural justice because if you look at what is happening in the Civil Service, a lot of people who are overdue for promotion at getting promoted without affinity with anybody to extort them in order to influence their promotion. Retirees and pensioners who have worked for years meritoriously without their pensions and getting paid now under Governor Makinde as and when due.” Josiah added.

Some of the participants which include group of street urchins invited to the event while explaining their grouses which led them to taking to street life listed poverty, lack opportunities, social injustice, social discrimination among others as factors that influenced their frustrations leading to life on street.

One of the participants while speaking with Sunrisebulletin.com in Yoruba language said “taking Gin, drugs and other hard substances are our only way of staying strong in the face of no job, no source of income and frustration.

“Many youths have become so acclimatized to such substances that it will take a strong commitment by the government to rehabilitate us before such urge and feeling is taken away because it is not easy staying alive just for the sake of being alive.” The participant said.

Another participant who did not want his name mentioned said “anger will naturally set when you wake up and you have nothing to live for, no money, no work, nothing. A hungry man is an angry man, many youths wake up every morning frustrated with no source of livelihood, except government is committed to create opportunities that will make is useful to ourselves and our families, the street is the only place we find consolation.

“Seeing people living in affluence with their children making us feel like their slaves with different rights and access to opportunities ordinary brings anger and frustration.

“Discrimination is the bane of youthful frustration when children of the rich are treated specially differently from children of the poor makes you feel like are we not the same? Even at public place the police and other government agencies create this sense of discrimination between children of the rich and those of us not from rich families differently such that you are just angry with everything. Let government begin to address all these issues and you will see peace everywhere.” The participant declared.

Honourable Femi Josiah has however said that the Oyo State government will continue to consolidate on the gains of its achievements to create an enabling environment where everyone will have equal access to aspire for greatness and be exposed to the path of becoming self fulfilled.