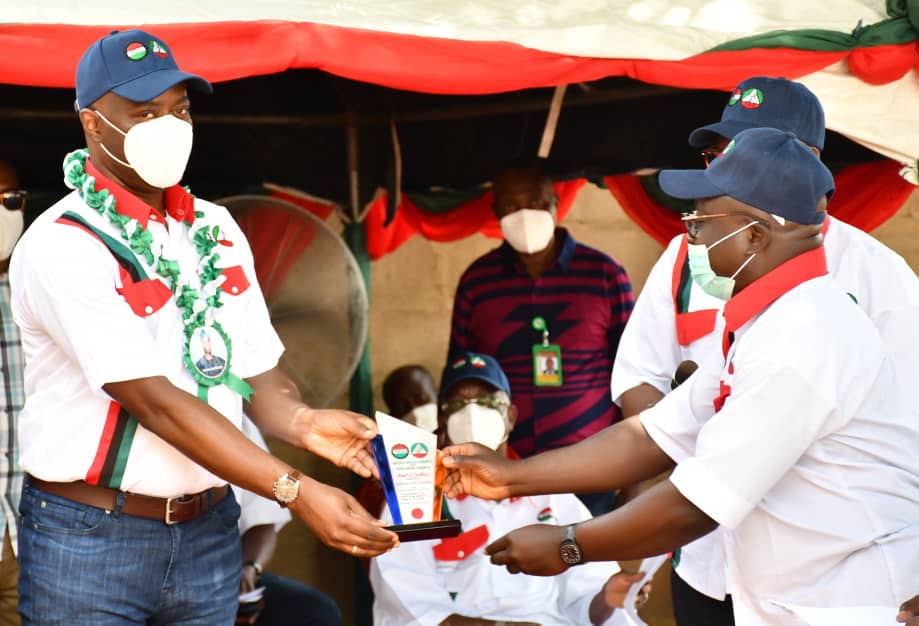 Oyo State governor, Engineer Seyi Makinde, on Friday, declared that the economic safety and wellbeing of the state’s workforce and the common man would continue to take precedence under his watch.

The governor, who was speaking at the Secretariat of the Nigeria Labour Congress (NLC), Oyo State branch, located at Labour House, American Quarters, Agodi, Ibadan, during a special programme to mark this year’s Worker’s Day and which was held in accordance with the Covid-19 protocol of social distancing, assured workers in the state that his administration would readily give priority attention to their welfare.
According to the governor, despite the economic downturn in the country, his administration would continue to pay salaries on the 25th of the month popularly called the GSM date.

A statement signed by the Chief Press Secretary to the governor, Mr. Taiwo Adisa, also quoted the governor as stating that though the Covid-19 pandemic has brought harsh economic effects on the state, with the next few months likely to be difficult, the situation has equally presented an opportunity to reposition the state’s economy.

At the event, the NLC chairman, Comrade Bayo Titilola-Sodo and the chairman of TUC, Comrade Emmanuel Ogundiran, in their separate remarks, appreciated the governor for prioritising workers’ welfare, prompt payment of salaries and pensions and for surpassing the 96 months record of the previous administration in pension payment in only 96 days.
The unions promised to continue to support the administration to do more for their members, just as they presented Governor Makinde with an award of excellence as the most worker-friendly governor.

Speaking earlier, the governor stated that as part of plans to reboot the economy of the state, the government was already leveraging on agriculture.

He, however, declared that schools in the state may remain shut till July 15, adding that by that date, the second term could resume and get concluded within two weeks, while the third term will immediately kick off.

The governor said: “When I was taking over the affairs of government on May 29, 2019, I never envisaged that our first Worker’s Day celebration would happen without the usual pomp. No one would have thought at that time, that in just about a year, the world would be thrown into confusion as it struggles to understand a new strain of the coronavirus disease. But as the saying goes, “you have to take the bad with the good.”

“Historically, this day has been set aside as a holiday in solidarity with workers. It is a day to remember that the labour of workers, in the public and private sector and in the formal and informal sector, is the back on which our economy rests. It is a day to take stock of how we, as a nation, have been treating our workforce and what we need to do to improve their working conditions. It is a day to reflect and assess.

“It is also a day to commend and appraise.
“The next couple of months are going to be difficult ones, but we are working hard to mitigate the shocks to our economy.
“Already, we have secured the cooperation of the legislature to take a 30 per cent cut to their monthly allocations, while senior government appointees take 50 per cent pay cuts. This is because we feel that the economic safety of the workforce must be prioritised.

“We must, on this day, appreciate the efforts of those who have taken pay cuts so that others may be catered for. I am happy that under this administration, the wellbeing of the common man takes precedence. I give you my word; we will continue to put in the work needed to ensure that you are never paid with “bear with us” at the end of any month.”

Governor Makinde stated that he would continue to keep the promise he made in his inaugural speech to pay workers’ salaries on or before 25th of every month, adding that he has also kept the administration’s commitment to pay minimum wage beginning from January 2020.

The governor, who also used the occasion to appreciate workers of the state including health workers and others who have been volunteering in one capacity or the other for their commitment, understanding and cooperation in the fight against Covid-19 in the state, regretted how the pandemic has affected workers, especially private school owners, club owners, event planners, transporters and countless others, whom he said have been most hit by the situation.
He, however, noted that the pandemic has also presented the state with an opportunity to reposition its economy by revitalising agribusiness initiatives.
He said: “The Covid-19 pandemic has struck.

It is now the responsibility of us all to build something out of this pandemic that will make generations to come proud. Post-Covid-19, we will be left with an economy which must be grown and sustained. This was why I ran for governor, for a time like this. I will make the tough decisions so that our economy can thrive.

“We want to get our economy back on track. This is why we have started opening up the system while keeping an eye on the reports from the Oyo State Covid-19 Emergency Operations Centre.

“We have partially opened up the State Secretariat. We are picking up infrastructural projects that we have had to hold off. Already, some projects have been approved in the last week. We are injecting funds to kick start our economic recovery.

“Amid this pandemic, on April 14, 2020, I signed the Oyo State Agribusiness Development Agency Bill into law. The core mandate of this agency is to create Private, Public and Development Organization Partnerships that will ensure food security in Oyo State and grow our economy.”
On the resumption of schools in the state, the governor said that July 15 is a “drop-dead date” already picked by the government, noting that the administration remained hopeful that it will be able to reopen schools by that date.
He said: “I was having a discussion with private school owners and the schools are all closed. They rely on the school fees to pay the teachers they have employed. Now, the children are at home, they have to keep the teacher but there is no fund to pay. My idea is, we need to let the parents know that this period that their children are at home, we take it as their long vacation. We have a drop-dead date of July 15th. We are hopeful that we will be able to open the schools by July 15th and if we do that, they will complete the two weeks of the second term and immediately start the third term. This means there would not be any long holiday again and they will just flip around and start the next term.”

There is No Rift Between Me And My Deputy- Seyi Makinde