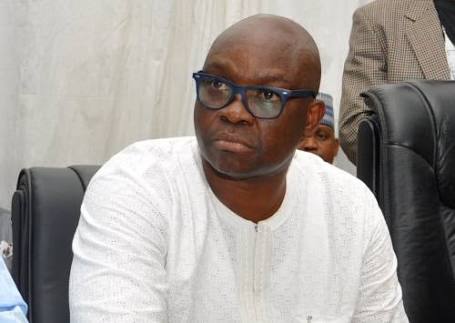 Will Send Obasanjo Back To Prison If……. — Ex Ekiti State Governor, Ayo Fayose

Former Ekiti state governor, Ayodele Fayose, has expressed his displeasure over the administration of Olusegun Obasanjo, who was both Nigeria’s ex Head of state and President.

Fayose on Tuesday, August 11, said that if he becomes president, he will send Obasanjo back to prison for alleged financial corruption that characterised his government for eight years, The Nation reports.

According to Fayose, the former president enriched himself with national funds while he was in power.

The former Ekiti governor also accused Obasanjo of making some hate speeches and that for this reason, he should be brought to book.

He categorically said: “I pray one day I will become president of this country by God’s grace. Obasanjo will go back to prison.

“I’m telling you the truth because there are so many things Obasanjo must be questioned about.”

Earlier, Sunrisebulletin.com reported that Fayose had slammed Obasanjo over the tone of his condolence message on the death of Senator Buruji Kashamu.

Fayose alleged that Obasanjo has no right to bad-mouth the late senator over some of his controversial activities because he was one of his accomplices.

The former Ekiti governor said that it was regrettable that Obasanjo is now coming now to speak ill of the deceased lawmaker at a time when he cannot answer any question.

Fayose claimed: “Can Obasanjo say in good conscience that he did not at some point collaborated with Kashamu and most of the things he (Kashamu) did politically were not with his collaboration?

“Nigerians will watch out for Obasanjo’s own end, he should stop forming saint because he is not.

“He should also remember that his own end will come too and nobody knows how the end will be.”

FG May Impose Visa Restrictions On US — NIS