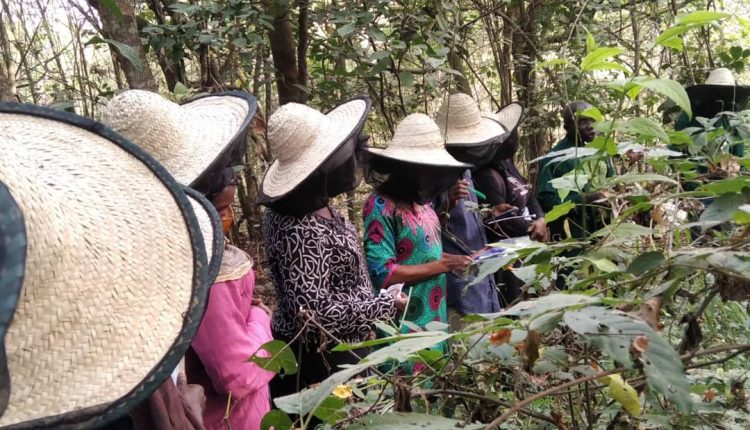 As part of measures to intensify advocacy for the preservation of the forest and promotion of what was described as ‘Green Livelihood’, a Non Governmental Organization (NGO), Women Environmental Programme (WEP) as a gender technical has partnered with Women Engage for a Common Future (WECF) alongside Environmental Conflict Mediation and Women Development Initiative to reach out to forest dependent communities in Akinyele area of Oyo state to provide a 4-day special training.

The Training according to the organizers was part of advocacy measures aimed towards preserving the forest which provides good ozone layer for people in the face of the global warming which has become a global topical issue among world leaders as well as promote Agro-ecology, Agripreneur, and Agribusiness among forest dependent communities.

Speaking with Sunrisebulletin after the four days training on what was tagged “gender-aware forest management techniques geared towards ensuring that rural communities become aware of how to sustainably manage and conserve the forest, Mrs Ijeoma Ladele, the Executive Director and Convener of Green Livelihood Alliance, (GLA) said the intense four days training became imperative following activities of rural communities in the face of the present global warming.

Mrs Ladele explained that the training focused on areas such as organic farming for residents in Ajibode area of Akinyele, on tree planting, crop rotation, shifting cultivation, pest management as well as what she called Agripreneur or Agribusiness strategies all in a bid to promote agro-ecology noting that the anchor of the training segment, Mrs Ologundudu had delivered a great lesson which if adequately practice can bring about a quick turn around in the Agricultural sector of Oyo state.

Mrs Ladele said: “The Forests for a Just Future programme of the Green Livelihoods Alliance (GLA) aims to ensure that tropical forests and forest landscapes are sustainably and inclusively governed to mitigate and adapt to climate change, fulfil human rights and safeguard local livelihoods.

“Our day two featured Organic Farming training for Ajibode organic farmers on Agro-ecology: Tree planting and its benefits, Agro-ecological practices like crop rotation, shifting cultivation, pest management practices as well as Agripreneur /Agribusiness strategies which includes developing a cooperative or thrift society among themselves to be able to secure fund for purchasing necessary inputs.

“Benefits and opportunities to be explored in organic agriculture were also emphasized. 20 farmers were trained. Farmers gave their comments; some of which hinged on the effort to reduce global warming. Planting of trees and reducing pro-deforestation farm activities was noted.

“However, they made mention of an extension of this campaign to the cities; proposing a situation whereby trees will be used to landscape residential areas and streets, to an extent that it can form a condition for building plan approval.

“They raised the need to encourage planting of economic trees that government could incentivize people by buying back the output. It was also raised that education on awareness about global warming and its prevention should be legislated and factored into the nation’s educational curriculum right from the primary school level.

“Despite the fact that the farmers cultivate their produce using organic principles and have knowledge of some organic practices like compost making, they do not produce their compost manure as taught because they perceive its time consuming. Some of them were practicing surface composting instead of the pit method of making compost while others buy organic manure from the market.”

Other segments of the training include Energy Savings Stove at Ijaye Alade Community. The training which was facilitated by Mr. Akanbi Jamaldeen and Mrs. Abdul Temitope focused on enlightening villagers on organic farming, wood and energy conservation, deforestation and climate change and its implication on environmental security.

The segment facilitatora emphasizeed on the need to discourage land burning as stressing that such act often leads to loss of soil nutrients amidst other environmental issues.

Speaking on mainstreaming of gender into management and conservation of forest resources in South-west Nigeria, Dr. Olugboyega Oyeranti, one of the scholars from the forestry department, ministry of environment, CSOs’, NGOs’ and department of Forestry, University of Ibadan, described forests as amongst the most biologically-rich terrestrial systems.

Dr Oyeranti maintained that the forest constitute the green blanket covering the earth. He said one-third of the world’s land area is forested which includes closed as well as open fruits adding that forests means different things to different people noting that some people see forest as impediment to development and must be destroyed, others see it as abode of the dead, evil spirits and anything diabolic among other point of views.

He stressed that forest is a renewable natural resource which provides timber and other products for home and industry; food and cover for wild and domestic animals, protection of soil and water values, and facilities for recreation warning against continued deforestation especially in African part of the world.

The fourth and last day of the training however, centered on Bee keeping and Honey production which also included a practical session during a visit to the Apiary site of the University of Ibadan where no fewer than 15 participants were trained on apicultural management for maximum economic benefits.