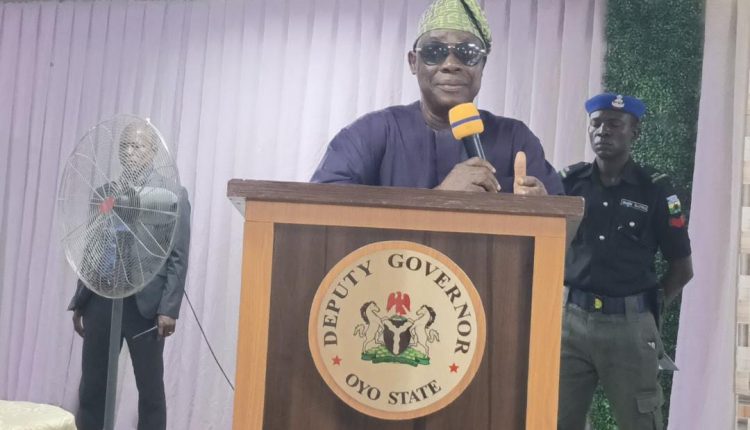 The administration of Governor Seyi Makinde has reiterated its determination to transform the state Civil Service and make it more responsive and result-oriented with a view to making it more productive.

Makinde who was represented by his deputy Barrister Abdulraheem Adebayo Lawal at the event oragnized by Association of Retired Heads of Service and Permanent Secretaries of Oyo and Osun States (AREHSPSOOS) held at Pensioners House, Agbarigo, Ibadan.

A statement by the Senior Special Assistant on Media, Omolere Omoetan quoted Lawal as stating that this administration had restructured the public service through adequate training and re-training and motivations of its staff with a view to preparing them for future challenges.

While declaring that the Civil Service remains the engine room of any administration, he advised and pleaded with civil servants to be circumspect while dealing with politicians.

He equally congratulated all the honourees charging them on the need to constantly and consistently guide those who are still in active service to enhance their productivities.

In his opening remarks, a former military Governor of old Oyo State (now Osun and Oyo), Major General Oladayo Popoola said vibrant, focused and responsive civil service with shared core values of hard work and integrity which are important ingredients for the success of any administration.

In her goodwill message, the Head of Service, Alhaja Ololade Agboola while congratulating the octogenarians states that those in active service are open for advice recommendations from the elders.

She however said the administration of Governor Seyi Makinde since 2019 has entrenched professionalism into the Civil Service adding that the governor has approved the review of the civil service.

The highpoint of the event was the presentation of gifts to the retirees among them were, Prince ‘Lola Omojowolo, Chief (ARC) Biliaminu Adegboyega Shodeinde, Chief John Onaola Ajibola JP, Chief Mustafa Adebayo Oyero.

The event had in attendance Personal Assistant to the Governor, Alhaji Akeem Azeez, Permanent Secretaries in the Service of Oyo State Government among others.

Show Up, It’s Getting Too Late, Makinde Media Team Charges Oppositions Not To Abdicate Their Responsibilities.