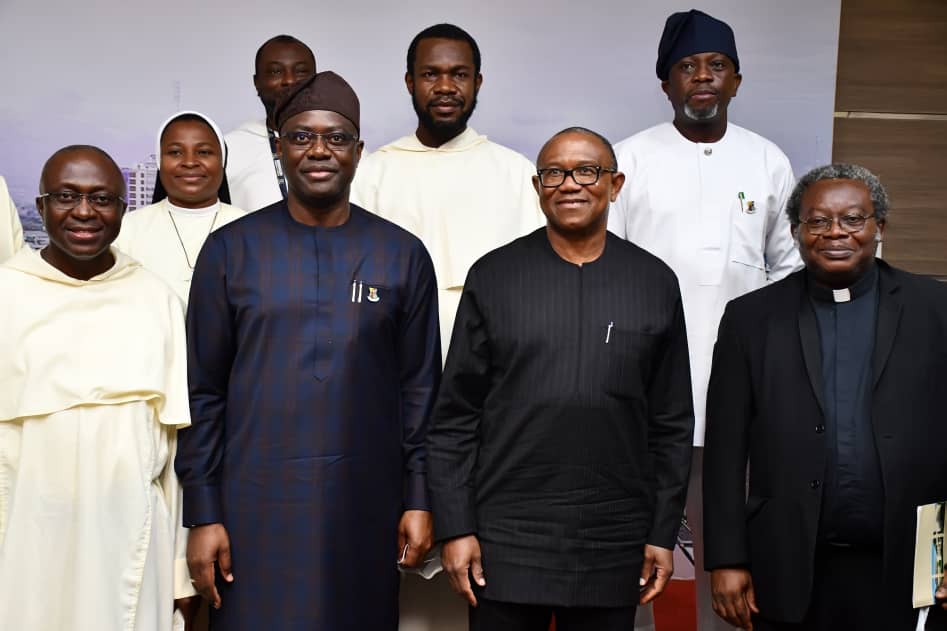 Oyo State governor, ‘Seyi Makinde, on Thursday, reiterated his administration’s determination to continue to make businesses thrive in all the nooks and crannies of the state.

The governor, while receiving the management and governing board of Dominican University, Ibadan, led by its Pro-Chancellor and former governor of Anambra State, Mr. Peter Obi, at the Courtesy Room of the Governor’s Office, Secretariat, Ibadan, assured that following his administration’s efforts to upgrade the Ibadan Airport, more airline operators would commence operations in the Airport soon.

A statement by the Chief Press Secretary to the governor, Mr. Taiwo Adisa, quoted the governor as stating that his administration will partner Dominican University to improve the educational system of Oyo State.

He equally assured that the government will look into the demands of the University.

He said: “First, let me thank you for your support during my election. The Catholic community supported me 100 per cent and I know where the University is. I have had meetings and I believe it is the Teachers’ Institute that is located around that place. So, I have taken the road before and I am sure we need to do something and we will.”

Makinde, who maintained that his government will look into the institution’s request for a review of taxes imposed on it by the state’s Board of Internal Revenue, said the matter will be resolved in a win-win manner.

“We will look at the complaint and take care of it. And we will resolve it in a manner that you are not going to lose and Oyo State Government, also, will not lose.

“Yes, I am aware of the fact that you are a non-profit making organisation and, for you to have chosen Ibadan, Oyo State as the first place to establish a university on the continent of Africa, the least we can do is to give you the support.

Speaking further, Governor Makinde maintained that his government would continue to do everything possible to ensure that businesses thrive in the state, noting that the recent efforts by the state government to upgrade the Ibadan Airport have begun to yield positive results.

“The former governor of Anambra State, Peter Obi, said he will be flying to Abuja in the Air Peace Airline this morning and I said that the singular act of introducing competition removes the cost of travelling between Ibadan and Abuja from N80,000 to 30,000 now. So, you don’t need to go to Lagos.

“You can get 30,000 flight in here. More competition is coming, as more airlines will start operating from this place. So, the options will really become multiple for us.”

He added that the state-owned Akufo Farm Settlement was equally affected by the rail project and the Circular Road, stating that his administration has been operating an open-door policy and that it will find lasting solution to the challenges of the Dominican University.

He said: “If you go round that environment and you see the land where you want to carry out that expansion, you can come back to us and we will give you approval. But I know that NUC also has a minimum requirement, in terms of hectares of land that you need to have to meet its certification.

“We are aware of this. People have been coming to me; other universities wanting to meet the NUC requirements. We got the approval to set up a satellite campus of LAUTECH at Iseyin and they gave us those conditions for us to meet as well. Just like you rightly mentioned, this is a partnership and we will also want to be a partner,” the governor added.

Earlier, the Vice Chancellor of the University, Professor Anthony Akinwale, commended the Makinde-led administration for making education and healthcare two of its topmost priorities, adding that with Governor Makinde at the helms of affairs, Oyo State is in good hands.