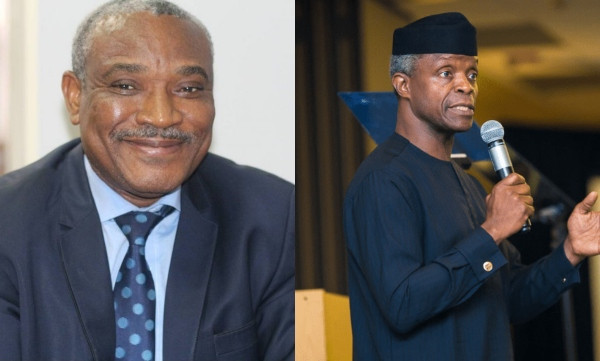 Okoi Obono-Obla, the suspended Chairman of the Special Presidential Investigation Panel on the Recovery of Public Property has blamed his run-in with the Independent Corrupt Practices and other related offences Commission on Vice President Yemi Osinbajo. In a lawsuit he filed to challenge the said probe for alleged certificate forgery and extortion on Tuesday August 20, the suspended SPIP chairman said the ICPC had no power to invite, arrest, detain, investigate, or prosecute him in connection with alleged falsification of academic certificates.He also filed an ex parte application seeking an urgent hearing of the suit, while refusing to appear before the ICPC owing to his plan to challenge the summons by the commission. Punch reported that he alleged that part of the reasons he was suspended as the SPIP chairman, was that he was not taking instructions from Osinbajo.Obono-Obla also said the anti-corruption agency would not conduct a fair probe of his case, due to the closeness of the commission’s Chairman, Prof Bolaji Owansanoye to Vice-President Yemi Osinbajo.He also linked his travails to the investigations he launched against influential persons and organisations, and also attached a detailed list of his achievements as the Chairman of the SPIP in terms of recovery of looted funds and assets. Obono-Obla also alleged that he received death threats and sacrificed his comfort in assisting President Muhammadu Buhari administration to fight corruption.

Senator Sunmonu Gets Accolades From Friends, Political Associates And Family At An Event To Mark Her 60th Birthday.

Adebayo Shittu accuses Ajimobi of not also participating in NYSC