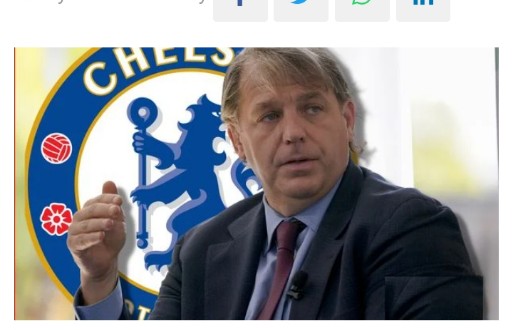 Chelsea confirmed in the early hours of Saturday morning that a deal has been agreed for the sale of the club to Todd Boehly, seeing him succeed Roman Abramovich as the Blues’ owner.

Boehly, Clearlake Capital, Mark Walter and Hansjoerg Wyss are all part of the purchase, and £2.5 billion of the money will be applied to purchase the club’s shares.

Proceeds will be deposited into a frozen UK bank account with, as the club explained, the intention to donate 100 per cent to charitable causes. A further £1.75 billion will be committed to the benefit of the club.

Who is Todd Boehly?

The new Chelsea owner may be a new name to many within football, but he is a more familiar face to fans of American sports, Marca reports.

This isn’t the first time he has shown an interest in football either, with reports suggesting that he tried to buy the West London club back in 2019 as well.

The sanctions taken against Roman Abramovich following Russia’s invasion of Ukraine, though, gave him the chance to finally make his move.

Boehly, a successful businessman, has previously revealed some of his strategies and keys to his success.

“When I’m negotiating, the objective isn’t to get the best deal for myself but for all parties,” Boehly said at a school reunion in Maryland in the past, as quoted by the Daily Mail.

“Most people try to wring every penny for themselves. That strategy earns them more money on one specific deal, but it doesn’t build trust or long-lasting relationships.”

After graduating with a degree in finance, Boehly’s career began as CS First Boston in New York in 1996, a division of Credit Suisse. He then moved to JH Witney & Co and then to Guggenheim Partners in 2001.

He has worked alongside Mark Walter for a considerable length of time, with the latter also part of the Chelsea consortium.

Boehly is also known for his philanthropy, having invested in a number of charities