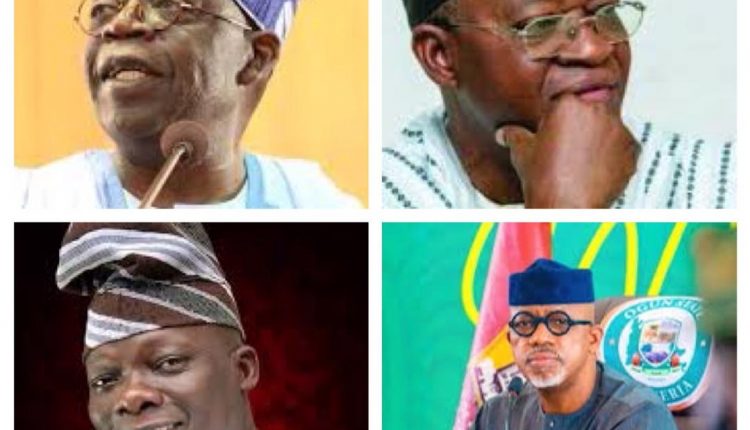 Rising from a clandestine meeting held in Abuja on Friday attended by about 20 leaders from Ogun, Oyo and Osun states, the leaders declared that Tinubu ambition cannot prevent massive votes against the governorship candidates of the APC because they have mismanaged the party and treated many party leaders with disdain, disrespect and disloyalty.

In an unofficial resolution, the leaders arrived at the following positions:

1. That the governors of Ogun and Osun states must be punished for their abysmal performance in state and party governance which cannot be whitewashed by hiding under Tinubu’s candidacy;

2. That the poor performance of both Oyetola and Abiodun constitute serious embarrassment to Senator Bola Tinubu for which the presidential candidate should also be ashamed ;

3. That Senator Teslim Folarin’s records with people of Oyo state is so negative that his rejection at the poll is a sure bet;

4. That Governor Oyetola is pointedly unpopular in almost all the local governments of the state with reports he was even stoned in some towns;

5. That Governor Oyetola rating is below 20% and so cannot be saved with Tinubu or any other external intervention;

6. That they remain loyal to Tinubu but will not work for those listed governorship candidates of APC from Oyo, Osun and Ogun state.

It would be recalled that Oyetola and others are now putting Tinubu picture by their posters.