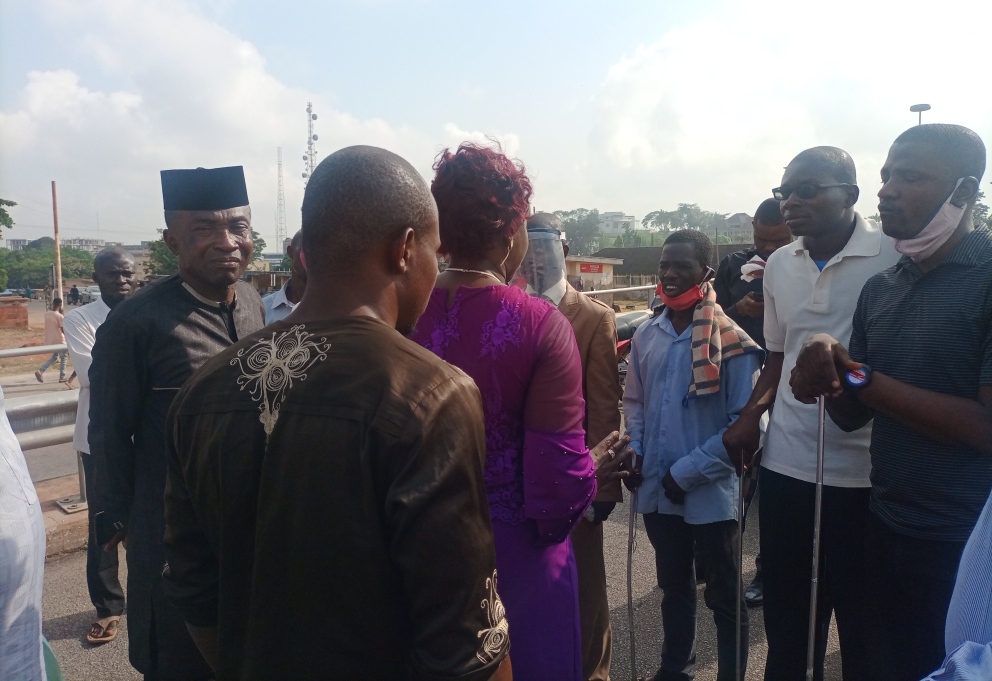 The Oyo state government through the Teaching Service Commission (TESCOM) has suspended the recruitment process of persons living with disabilities into the state non teaching service following allegations of list manipulation.

Applicants into the state non teaching service under the aegis of ‘Joint Association of People Living With Disabilities (PLWD) In Oyo State’ who barricaded entrance into the state Secretariat in Ibadan on Monday 7th December to protest what they described as ‘unfair treatment’ of people with disabilities’ in the state called on governor Seyi Makinde for his immediate intervention.

One of the protesters who spoke with journalists during the protest, Mrs. Olajide Folashade, alleged that governor Makinde promised persons living with disabilities 5 percent of the total number of nine thousand to be employed into both teaching and non teaching service.

She added that their calculation indicated that 350 of persons living with disabilities were expected to get jobs but only 149 names were released.

Another applicants who is also member of PLWD who spoke to journalists on condition of anonymity maintained that their findings indicated that the 149 names that was released by TESCOM had been doctored and some able bodied persons were also found on the 149 list.

Reacting to the allegation, TESCOM Permanent Secretary, Mrs Grace Oderinde, who expressed surprise at the action of the protesters while addressing journalists maintained that TESCOM has always been guided by the clear directive of governor Seyi Makinde to be fair and unbiased to everyone with special care for persons living with disabilities in the state.

Mrs Oderinde stated earlier that 300 members of persons living with disabilities were interviewed and only those who were able to pass the TESCOM test and interview were the 149 names on the list of teaching staffs released.

Sunrisebulletin.com however recalls that the Executive Assistant to Governor Seyi Makinde on Disability Matters, Barrister Ayodele Adekanbi, had on 10th of August, 2020, while speaking with journalists assured that qualified persons living with disabilities would get automatic employment.

TESCOM chairman, Pastor Akinade Alamu, in a swift reaction announced that the ongoing recruitment of persons living with disabilities into both teaching and non teaching service has been placed on hold pending outcome of a committee to be set up.

He made this disclosure shortly after a meeting with relevant stakeholders including commissioners for Establishment and Training, Education Science, And Technology, Professor Daud Sangodoyin and Barrister Olasunkanmi Olaleye.

Pastor Alamu stated that a committee will be set up immediately to investigate the list and veracity of the allegation by the protesters adding that the committee will make its finding public on Friday 10th of December.