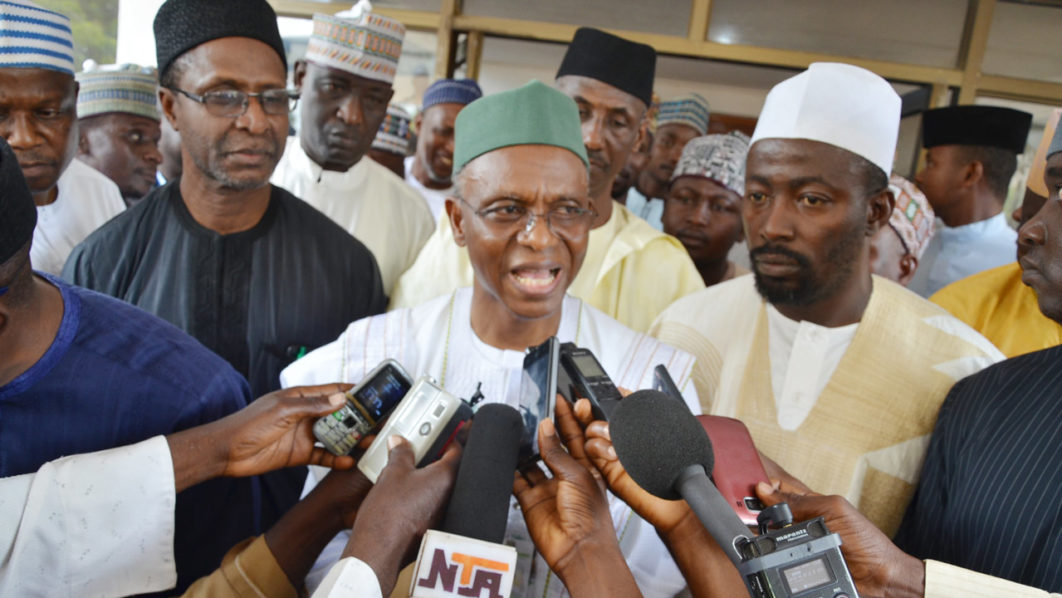 But not only are tempers rising and nerves frayed over the development, the Christian community in the state, and the predominantly Christian Southern Kaduna people have lambasted el-Rufai for the alleged misstep, saying the action may further fragment the state and promote disunity in a multi-cultural and multi-religious society, just coming out of crisis.

Furthermore, critics are of the view that his claims that the move was part of deliberate policy to promote women’s participation in governance, has failed to take cognizance of inherent geo-political idiosyncracies in the state, just as it smacks of insensitivity on his part.

Already, the Christian Association of Nigeria (CAN) in the North, yesterday, said the declaration might pitch the people against one another and exacerbate the prevailing political unrest.

Spokesman of CAN in the 19 northern states, Rev Joseph Hayap, said: “We all know that a governorship candidate is at liberty to choose anyone as running mate, but that liberty does not mean the governor should not be reasonable and considerate, with regard to the sensitivity of the area he governs and the challenges of the environment where he is operating.

“What some people are saying is that he is trying to encourage women. But doesn’t Southern Kaduna have Christian women eminently qualified than the person he nominated? By doing this, he is telling us the kind of governor he will be in 2019.

“It is now left to us in Southern Kaduna to tell the world whether this is the kind of governor we want in 2019 or not. I think the decision lies in our hands. We need a governor that will unite Kaduna and not divide it.”

The Secretary of Kaduna State chapter of CAN, Dr. Sunday Ibrahim, told The Guardian: “Looking at the peculiarities of the state, at this time when we are talking of peace, what the governor did is not right. Kaduna is a Christian-Muslim state. So, for him to have presented a Muslim-Muslim ticket is unimaginable. We in the Christian community are unhappy over that, but I can assure the people of Kaduna State that religion will not divide us.”

He added: “It has never happened in Kaduna State, that is for people of the same faith to govern the state, but the electorate will decide and not me.”

Also, the President, Arewa Youths for Development and Progress (AYFDP), Comrade Danjuma Sarki said: “I want to say that el-Rufai as a candidate, and APC as a party have a right to choose whoever they like as running mate, but it is also the people’s responsibility to interpret the motive behind the choice. I know the governor’s action was for his own selfish interest.

“The governor is trying to ride on the people’s gullibility to further his political ambition. Since el-Rufai came into power, we are aware that most of his policies were not to foster unity and peaceful coexistence among the people.

“Although politics should not be viewed from religious or ethnic perspective, but as leaders, we must be sensitive to the divisions within our society.

“What el-Rufai has done in Kaduna State has further placed a time bomb that might constitute a continuous source of problems to the people instead of fostering unity. It is condemnable and not done in good faith,” he stated.

For the Coalition of Nigerian Political Parties (CNPP) the governor’s decision would surely overheat the polity.

According to the publicity secretary of the group, Salisu Shuaibu Dawaki, there is noting wrong if the governor settles for a female running mate, but common sense dictates that she should be a Christian. “It’s an injustice for the governor to chose a Muslim running mate in a state like Kaduna when he is a Muslim.

Already, many people are even challenging him about his utterances. The situation that we are in Kaduna State now does not support the adoption of a Muslim-Muslim ticket.

“We have three geopolitical zones, one zone is dominated by Christians. So, for the governor to exhibit this kind of injustice towards them, and not to pick a Christian as a running mate is not democratic,” Dawaki argued.

Reminded that Balarabe equally hails from the southern part of the state Dawaki maintained that, “there are three geopolitical zones, but he should pick from the dominant part of the zone and not the minority. There are Muslims in Southern Kaduna, but it is dominated by Christians.”

In his comment, President of Southern Kaduna People’s Union (SOKAPU) Mr. Solomon Musa said, “I know there are things like issues of federal character and issues of balance and religion among others, but the governor has just exercised his own prerogative. I am sure he must have made his own political analysis, and opinion leaders must have advised him on that.

Musa, who said he was speaking in his personal capacity added: “But whether this step will help him achieve the feat he intends to achieve is another thing entirely. What we are hoping is that Kaduna State and Southern Kaduna should never be polarised along religious lines. If anybody decides to polarise the state along religious lines, that again is that person’s prerogative. But I am sure voters will pick their choice.”

But a retired civil servant, Dr. Ben Yaryok, who hails from Kargarko Local Council in Southern Kaduna see no big deal in the governor’s decision.

“Politics is completely different from religion. If you see somebody who is credible, whom you can work with to deliver whatever programmes you have for the people, then I see no problems whatsoever,” he said.

Yaryok continued: “For God’s sake the person we are talking about is firstly a Nigerian. Secondly, she is an indigene of the state. Thirdly, she is to work in tune with whatever the governor is planning for the whole people. We should get it clear that when a government plans a programme, it is for everybody and not meant to discriminate against religions. Let us grow above religious sentiments as far as development is concerned.”

Dr. Balarabe, born in 1966, is from Sanga Local Council, which is located in the Southern Kaduna Senatorial District.

ASUU begins strike, as labour get set for tomorrow