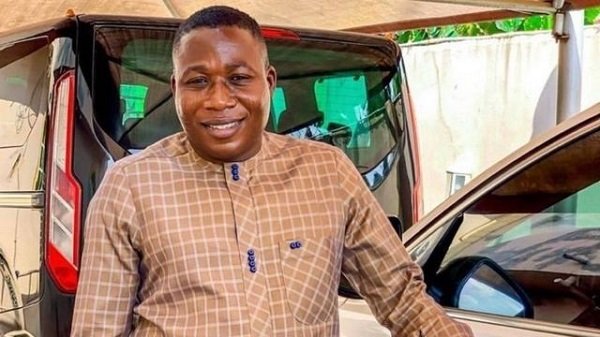 Olusegun Falola, one of the lawyers of embattled Yoruba Nation agitator, Sunday Adeyemo, aka Sunday Igboho, has said his client is staying away from the hostile environment which President Muhammadu Buhari created in Nigeria.

He further said Igboho’s stay in Benin Republic detention is a blessing in disguise.

The lawyer added that the rights activist would not return to the country until after the expiration of Buhari’s tenure in office.

Falola spoke during a radio interview monitored by The Nation.

Igboho has spent over one month in detention since he was “arrested” by the operatives of Brigade Criminelle (Criminal Brigade) on July 19 in Cotonou.

The 48-year-old agitator, who was first detained at the Brigade économique et financière (BEF), is at Prison Civile de Cotonou — Cotonou Civil Prison.

In the last judgment, the Cour De’appal De Cotonou ordered that Igboho should be kept in prison custody.

At the 13-hour hearing, the court had ruled that Igboho be sent to pre-trial detention pending conclusion of the investigation.

Speaking on efforts on Igboho’s freedom, the lawyer said, “Igboho’s arrest shows he was cheated, because he didn’t commit any criminal offence.

“I plead with all Yorubas and Nigerians at large, don’t see Sunday Igboho as a convict, see him as someone who is under Benin Republic’s protection. Igboho is only staying underground for now until when there is breath of fresh air.

“Nigeria did not show up in court or bring up evidence against Sunday Igboho. So there are no criminal charges against him. When Igboho leaves prison, he’ll demand asylum from other countries including France, and they will be ready to receive him.

“So he’ll return back to Nigeria when the administration that is against him leaves office.”

On decisions Igboho will take after regaining freedom, Falola said, “If Nigeria is yet to be a safe haven for him (Igboho) to return, especially for his freedom and maximum security, all his cars in Ibadan and businesses will be done in Cotonou.

“The judges asked Igboho if he had land in Cotonou and he responded that he has a land in Seme. So, there is still danger ahead. Igboho’s asylum in Cotonou is for him to stay in the country and do his businesses in the country and also travel to Germany to either live there or to travel to and fro. He’ll use Benin as his new home until Buhari’s tenure is over just for his own safety.

“We should be thankful to the Benin Republic government for granting Igboho access to medical attention. Also, his wife, Ropo goes freely to see him and to also interact with him and bring food regularly.

“If Igboho had been captured the way Kanu was extradited to Nigeria, then we won’t be talking about him today, his health would have worsened. Look at how his aides have been treated.”