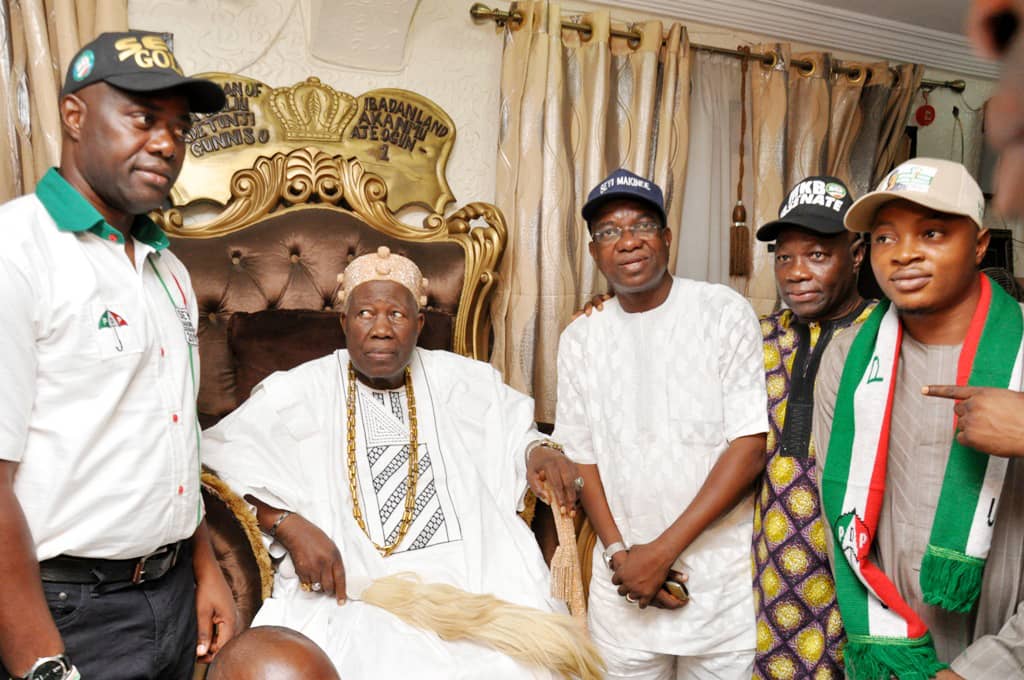 By Lere Omoetan On Feb 5, 2019
0 1
Share
Oba Saliu who spoke through Chief Lekan Alabi also reiterated the need for politicians to keep the promises they are making to the electorates when they get to office, speaking further he noted that Oba Saliu Adetunji is a father to all and as such politicians are welcome to his palace to seek his blessings. He also charge the people not to sell their votes.
Earlier Engr. Seyi Makinde had told the royal father that he had come to the palace to solicit for the support and blessings of the Olubadan. Stressing that though the Olubadan is a father to all but some sons are more deserving of the fathers support than others because of their laudable intentions for the people.
The PDP governorship candidate deplored the state of security and education in Oyo state, Makinde expressed his readiness to scrap the fees pupils are paying in public schools and also provide  basic infastructures for learning. On security he noted that providing jobs for the youths will persuade them from a life of crime, because an idle hand is the devils workshop.
Furthermore, Makinde said royal fathers will get their dues as prescribed by the constitution, he also spoke on his support for the restructuring of the country, he observed that if regions of the country are allowed to manage their resources rapid development will take place.
Engr. Makinde also used the opportunity to introduced other candidates contesting for various positions on the platform of the PDP in Oyo state. Engr. Raufu Aderemi Olaniyan  deputy governorship candidate, Dr. Kola Balaogun contesting as Senator Oyo South Senatorial zone, Stanly Olajide contesting as house of representative member Ibadan South west/ Ibadan Northwest federal constituency.
Oba Saliu Adetunji prayed for the success of the party in the coming elections.
Among those who accompanied the PDP governorship candidate to the palace included Chief Kimi Mustapha Oyo state PDP chairman, Engr. Femi Babalola, Dr.Nureni Adeniran, Hon. Bayo Sarumi, Chief Bayo Lawal, Iba Oluyole, Hon. Tayo Sarumi and several others.
Meanwhile, the PDP campaign train was in Ibadan South West local government yesterday with residents turning out in their numbers to show their support for the party’s governorship candidate, the campaign train visited strategic locations such as Molete, challenge, Aleshiloye market, Apata and a number of other places.
0 1
Share FacebookTwitterGoogle+ReddItWhatsAppPinterestEmail