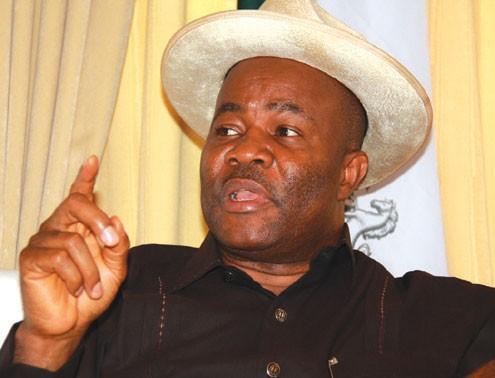 All seem set for former Akwa Ibom governor Godswill Akpabio to defect to the ruling All Progressive Congress, APC.
The peoples Democratic Party senator and minority leader in the Nigerian Senate met with, Vice President Yemi Osinbajo yesterday, the meeting according to our sources is to conclude arrangements the defection, of the two term governor of Akwa Ibom state, to the All Progressives Congress (APC) from the Peoples Democratic Party (PDP).

The duo went straight into the Vice President’s wing at the State House Villa. The two Akwa Ibom politicians came an hour after President Muhammadu Buhari departed for Bauchi State on an official engagement.

The meeting, which lasted till around 5.20pm, came on the heels of Akpabio’s defection plot. Akpabio is said to be mulling defection over his rift with the current governor of Akwa Ibom, Udom Emmanuel.

Sunrisebulletin.com was reliably informed that while Akpabio was with the vice president, the National Executive Council (NEC) meeting of his party, the PDP, was also going on, with Senate President Bukola Saraki and other defectors from the APC in attendance.
Our sources further said that Akpabio had since perfected his plans to dump the PDP.

“If not for the impunity of Saraki, he (Akpabio) would have announced his defection penultimate Tuesday when we proceeded on recess. He was to announce it that day but Saraki stopped him,” said our source who wishes to be anonymous.

Should Akpabio decamps, he would be the second senator from the oil rich Akwa Ibom to join the APC. In January last year, Senator Nelson Effiong (PDP, Akwa-Ibom South) joined the APC.

Senator Ladoja is a Major Brand, He will make ADC a brand in Oyo: Ralph Nwosu ADC National Chairman.