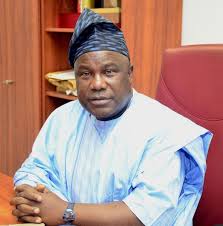 By Lere Omoetan On Feb 25, 2019
0 0
Share
Senator Abdulfatai Buhari, Chairman Senate committee for ICT and Cybercrime has been re elected for another term in Oyo North Senatorial District.
His reelection makes him the first Senator to win election twice in Oyo North Senatorial District.
According to the result announced by independent Electoral commission, INEC at the collation centre in Iseyin, Senator Buhari poll a total vote 107 ,703 while her close rival Hon Mulikat Akande Adeola scored 89, 365.
The Presiding officer Professor Jonathan Aileru while announcing the result said “Senator Buhari having fulfiled the requirement of the law by  polling  the highest vote in the election is hereby re-elected as the Senator representing Oyo North”.
His declaration sparks wide jubilation in Iseyin as he was joined by party members , including Shina Abiola Peller, House of Reps , Hon Wasiu Dauda, state commissioner for Works , among others.
Senator Buhari when contacted said he thank God for the grace and lauds  the electorates for their support
He promised not to betrayed the confidence reposed in him and assured them of better representation and good dividends of democracy
0 0
Share FacebookTwitterGoogle+ReddItWhatsAppPinterestEmail