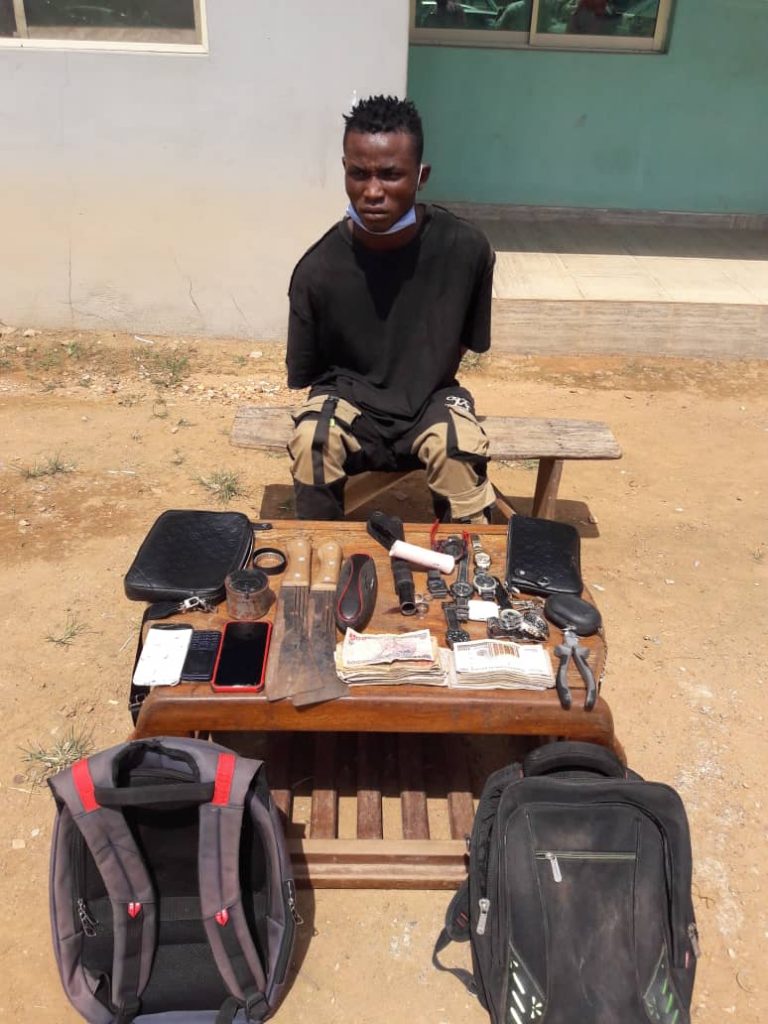 As part of efforts by the Oyo State Commissioner of Police, CP Ngozi Onadeko to reduce crime to its barest minimum in the state, the Oyo State Police Command has said that it has arrested one Adenipekun Opeyemi, a suspected armed robber terrorizing residents in Apete area of Ibadan.

The Police Command added that following the suspect’s arrest and subsequent confessional statement obtained from the suspect, it has been able to recover weapons such as Cutlass, Laptop, Electric Iron used as gun, cash worth about N194,000 (one hundred and ninety four thousand naira) and other items.

The state Police Command made this known in a Press Release by its Police Public Relation Officer (PPRO), DSP Adewale Osifeso and made available to Sunrisebulletin on Friday 18 of June.

Sunrisebulletin also gathered that the state Commissioner of Police, CP Onadeko, as part of strategic efforts to rid the state of criminal elements has improved working relationship with sister security agencies, deploying tactical security assets to flashpoints and hotspots across the state.

This strategic security approach was however, evident by some of the recent butched criminal activities in the outskirts part of Ibadan metropolis including intercepting a gunrunner and recovering guns along Oyo-Ogun border around Ibadan-Ijebu Ode road.

However, according to the Oyo Police Command, the suspect who was arrested on Sunday 13th of June, has admitted to committing the crime and has provided useful information which is expected to aid the police in apprehending the suspect’s accomplice who is still on the run.

The 22 year old suspect, Adenipekun, was arrested while he and his accomplice allegedly attacked and forcefully dispossessed occupants of God’s Gift Hostel, Papamorubo Apete area of Ibadan on Thursday 10th June, 2021 at about 0145hrs off their valuables ranging from phones, laptops, wristwatches and cash sum to the tune of One hundred and Ninety-four thousand naira only (N194,000).

The police statement reads: “The dragnet of Oyo State Police Command on Sunday 13th June, 2021 caught up with one Adenipekun Opeyemi ‘m’ aged 22yrs who in connivance with his accomplice still at large, allegedly attacked and forcefully dispossessed occupants of God’s Gift Hostel, Papamorubo Apete area Ibadan on Thursday 10th June, 2021 at about 0145hrs off their valuables ranging from phones, laptops, wristwatches and cash sum to the tune of One hundred and Ninety-four thousand naira only (#194,000).

“Therefore, the Commissioner of Police wishes to emphatically assure the good people of Oyo State that effective and proficient deployment of security assets have been made to ensure heightened levels of security in the State.

“She therefore, appeals for calm and that credible and timely information be provided at all times.

“The NPF rescue me app is also available for free download on both Android and Apple IOS, for Android and Iphone users respectively.”