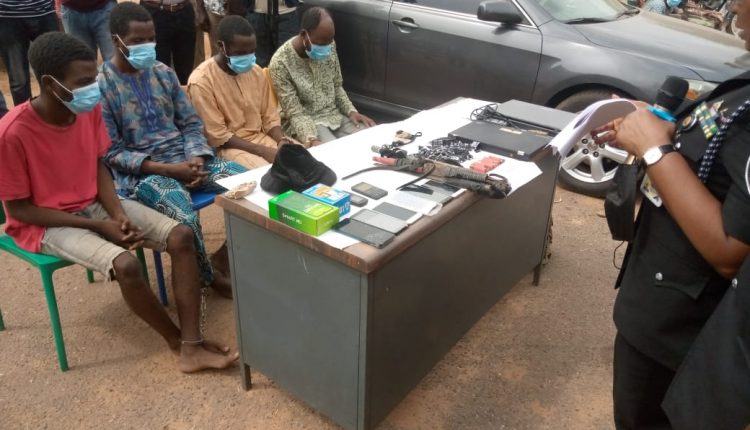 The Oyo State Police Command under the leadership of the Commissioner of Police, CP Ngozi Onadeko, has stepped up it’s fight against crime and criminality in the state especially in Ibadan metropolis as it paraded one suspected ritualist with human head alongside 43 other armed robbers. 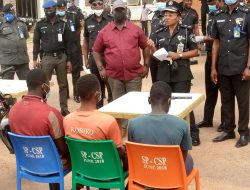 The 42 other armed robbers arrested according to the CP have been terrorizing different parts of Ibadan, the capital city of Oyo state even as the police have also recovered dangerous weapons and other items including guns, Toyota Camry (Muscle), Mazda Premacy with Registration number BDG 589 EZ computer laptops, phones, motorcycle spare parts, sewing machine, power generator, and others.

Speaking with newsmen in Ibadan during the December month press briefing of activities of the state Police Command held at the Command Headquarters, Eleyele, Ibadan on Tuesday 7, Onadeko commended men and officers of the police in Oyo state for their gallantry and renewed commitment towards weeding the state of criminal elements and ensuring a crime free Oyo state describing the suspects arrested as a major breakthrough and accomplishment in crime fighting.

The Oyo State police boss reiterated the commitment of her Command towards deepening interagency collaboration with other sister security agencies including non conventional security agencies in its mandate of providing security for lives and properties of all citizens and residents in the state.

Onadeko said: “Gentlemen of the press, it is with a sense of great responsibility and purpose that I welcome you to yet another account of stewardship, today Tuesday 7th December 2021, this gathering accounts for some of the breakthroughs and accomplishments of our courageous and valiant officers and men in the onslaught against crime and criminality within the period in view.

“In a swift response to the evolving trends and as the lead agency on internal security, the Command through purposeful driven intelligence, redefined its operational and tactical architecture to engage these challenges with strategic partnerships with relevant sister agencies and other non-state actors, hence the harvest of successes showcased.”

Speaking on the suspected ritualist arrested, Onadeko said men and officers of her state attached to Mapo Police Headquarters On Monday December 6, 2021, at about 1217hrs, while on intensive and intelligence driven Patrols around Popoyemoja and Idi-Arere areas apprehended a 50 year old Moruf Ganiyu, a native of Ibadan with a human head in his possession which was concealed in a Nylon bag.

Subsequently upon arrest and interrogation by the Police, the suspect according to the Police boss also admitted and confessed to the crime adding that the suspect exhumed a corpse after which the head was cut off at Abode Cementry along Akaran Road Ibadan.

“On Monday 06/12/2021 at about 1217hrs, operatives attached to Mapo Divisional Police Headquarters while on intensive and intelligence driven Patrols around Popoyemoja and Idi-Arere areas apprehended one Moruf Ganiyu ‘m’ age, 50yrs of 56 Omikunle Ilupeju area Ibadan who had in his possession a human head concealed in a Nylon Bag.

“He confessed to the crime and claimed the human head was exhumed from Abode Cementry along Akaran Road Ibadan and sold to him by one Abideen Raheem ‘m’ of Ile-Sheu, Olomi-Ibadan at the rate of #25,000 (twenty-five thousand) for the purpose of Money Rituals.” CP Onadeko said.

Speaking with journalists, the suspect, Moruf Ganiyu who spoke in Yoruba native Language confessed to the crime saying that his friend Abideen Raheem had contacted him for the human head with the purpose of making money ritual adding that the human head was sold to Raheem for the sum of N25,000 (twenty five thousand naira.

Ganiyu said: “It was this my friend, Raheem, who requested for the human head. I actually wanted to help him because he told me he needed the head for money ritual. After I exhumed the corpse from his grave I cut the head with a knife and took the head to my friend who had requested for it in order for him to make money ritual.”

In his confession to newsmen when interviewed, Raheem who claimed to be a poultry farmer admitted to commiting the crime. He noted that though it was his first time of engaging in such criminal activity he however, blamed it on the devil.

Onadeko, who berated the get rich fast syndrome leading to such heinous crimes warns that the hand of the law will catch up with whoever engages in such criminal activity and the full weight of the law will fall on whoever is culpable. She however, reeled out the state Police toll free and control room numbers in case of any emergencies saying that the Command can always be reached through the emergency control room number: 615 (Toll free) (OYO STATE SECURITY TRUST FUND). Oyo State Police Command emergency lines 07055495413 and 08081768614.

Meanwhile, 42 other suspected criminals were also apprehended and paraded by the Oyo State Police Command during the December month press briefing. The police noted that intensive investigations are still ongoing to unravel other possible connections and or network with the suspects in custody assuring residents of the state of Police renewed selfless commitment towards the safety and security of everyone within the state.

The other 42 criminals were arrested at various parts of Ibadan by the Oyo State Police. According to CP Onadeko: “On Tuesday November 30, 2021, at about 1130hrs, one Makinde Taiwo ‘f’ was going around Adiata area Ogbomoso and she sighted some of her bags that was stolen away from her burgled shop sometimes in the month of October, 2021 and at the said shop by one Amos Grace ‘f’ who claimed that she collected the stolen items from one Ogundiran Tope ‘m’ on that same day, Makinde Taiwo reported the case at Owode Ogbomoso Police station.

“Based on that information, Amos Grace was arrested and led Police to Onifitila house Ogbomoso where Ogundiran Tope was arrested and found in his possession Two (2) Sewing machines, Twelve (12) Motorcycle tyres, Two (2) Tiger Generators, One (1) sack bag containing different types of cloths, One (1) black pearl Television, Some motorcycle spare parts.

The Police boss who said investigations are still ongoing also vowed to apprehend others still at large saying that there is no hiding place for any criminal and unscrupulous elements in Oyo state.