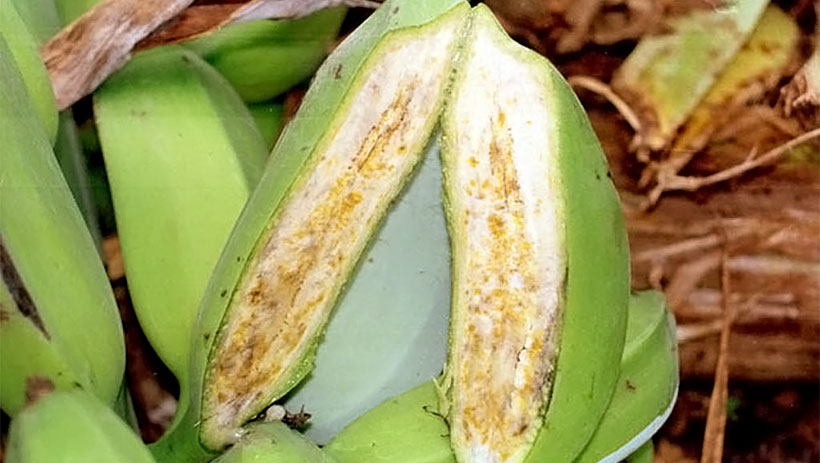 A team led by scientists from the International Institute of Tropical Agriculture (IITA) have announced a breakthrough in the search for banana varieties that are resistant to the lethal bacterial banana wilt disease. This debunks the notion that all banana varieties are susceptible to the disease and opens the possibility of breeding resistant varieties.

Scientists’-breakthrough-brings-hope-for-banana-resistance-breeding-to-deadly-bacterial-wilt-disease
Early ripening and rotting of banana caused by Banana Xanthomonas Wilt.
The disease, which causes premature ripening and rotting of the fruits, wilting, and eventually death of the plant, has drastically affected the highland cooking banana production in East and Central Africa (ECA) and the food and income of millions of farmers.

Until now, the scientific world believed that all banana varieties in the region, except for a wild-seeded banana called Musa balbisiana, were susceptible to the disease, which originated from Ethiopia and has now invaded all banana growing areas in the highlands of eastern and central Africa.

The disease is caused by Xanthomonas campestris pv. musacearum bacteria and its symptoms include yellowing and wilting of leaves, a cream to pale yellow bacteria-laded oozing when the plant is cut, shriveling of the male bud, premature ripening, internal discoloration of fruits, and finally death of infected plants. Transmission is fast and mainly through contaminated tools, insect vectors, and planting material. Therefore, major investments by national programs, donors, and scientists have been geared towards rigorous monitoring of banana fields, removal of diseased plants, and decontaminating farm tools.

“This discovery is very important for the millions of smallholder banana farmers in the region as one of the most effective ways to control any disease is developing resistant varieties,” says Nakato, based in IITA, Uganda.

Bananas are an indispensable part of life in the region providing up to one-fifth of the total calorie consumption per capita. The average daily per capita energy from banana consumption in ECA is 147 kcal: 15 times the global average and 6 times the African average. The region has over 50% of its permanent cropped area under banana; this is around half of the total area under banana cultivation across Africa. ECA countries (Burundi, DR Congo, Kenya, Rwanda, Tanzania, and Uganda) produce annually 21 million tons of banana with a value of US$4.3 billion.

The team systematically screened the entire banana collection at IITA, Uganda, and identified 13 other sources of resistance next to M. balbisiana. Most importantly, Nakato identified several diploids derived from Musa acuminata—another wild banana—and which are already part of the existing highland breeding program of IITA and NARO (National Agricultural Research Organisation, Uganda).

“The findings of this study are very significant for the banana breeding community and we will redouble our efforts in developing banana varieties with resistance to the disease,” says Swennen.

Other partners in the study included the University of Pretoria, South Africa and Centre of the Region Haná for Biotechnological and Agricultural Research, Institute of Experimental Botany, Academy of Sciences of the Czech Republic.