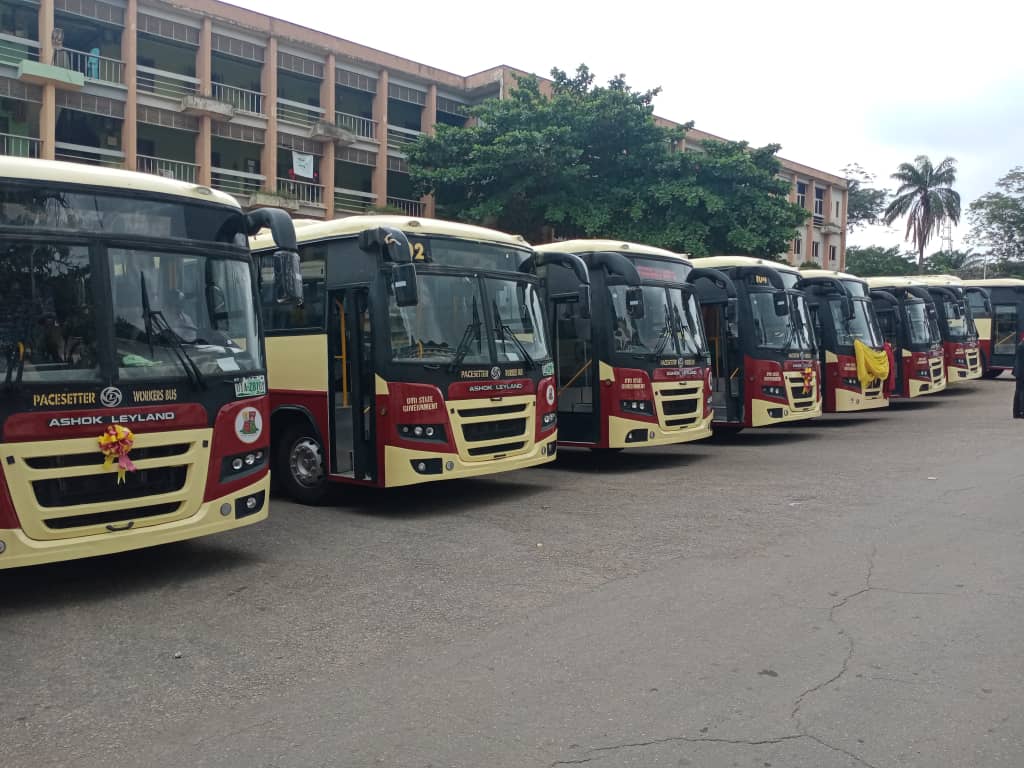 The Executive Chairman of Pacesetter Transport Service (PTS), Mr Dare Adeleke, has reacted to the report making rounds in some section of online news media by debunking it as entirely false saying that the story was maliciously fabricated by politicians to score what he described as ‘cheap political scores,’ Sunrisebulletin reports.

According to a story published by Sahara reporters at the early hours of Friday August 13 2021, it was alleged that 22 out of 90 buses purchased during the administration of immediate past Governor, Abiola Ajimobi who is now late, have been allegedly sold off by Dare Adeleke.

Speaking over the phone with Sunrisebulletin on Friday when contacted, Adeleke explained that it was all part of political machinations and ploy by detractors of the present administration of Governor Seyi Makinde to peddle falsehood in order to score cheap political point.

“My brother, it is all politics, this is the season of politicking, the story was maliciously fabricated from the pit of hell by some politicians to distract the present administration under Governor Seyi Makinde.

“Couple with the fact that It is not even possible for any one person to sell or auction government properties without going through due process and approvals by the appropriate quarters so, such malicious allegation should simply be discarded in its entirety,” Adeleke said.

According to the 13th August, 2021 Saharareporters report, “At least, 22 out of 90 buses purchased during the administration of the immediate past governor of Oyo state, Senator Abiola Ajimobi have been allegedly sold off by the Chairman of the Pacesetter Transport Service (PTS), Mr. Dare Adeleke, a petition to the state government has read.

“According the petition seen by SaharaReporters, Adeleke; General Manager of the company, Akinleye Akinwole and its Director of Finance, Mrs. Ogunjobi have allegedly contracted some spare parts dealers at Gate Spare Parts Market, Ibadan to secretly move the reparable buses out of the premises of the company at Eleyele, Ibadan on Sundays.

“Adeleke, according to a petition written by some concerned staff members of the company and addressed to the governor of the state, Seyi Makinde, has also sold about 9 abandoned Hummer buses without the consent of the state government.”

However, Adeleke explained further that it was because Governor Makinde provided the Pacesetter Transport Service with take-off grant that it was able to acquire 40 additional buses for ease of workers transportation as well as reduce the economic burden of mobility to and from work.

The PTS boss berated politicians behind such publication which he said defied logical reasoning by an informed mind considering the zero tolerance by the Seyi Makinde-led especially towards flouting due process in either procuring or selling government properties.

“Let me tell you categorically, come to the PTS office and see the moribund buses they maliciously allegedly to have been sold off, it is all politics my brother so ignore peddlers of such evil story, the people are wiser now because the era of using false propaganda to dissuade the masses in order to score cheap political point is long gone,” Adeleke said.

Chelsea’s Lukaku Ahead Of Neymar, Ronaldo As Most Expensive Player Ever