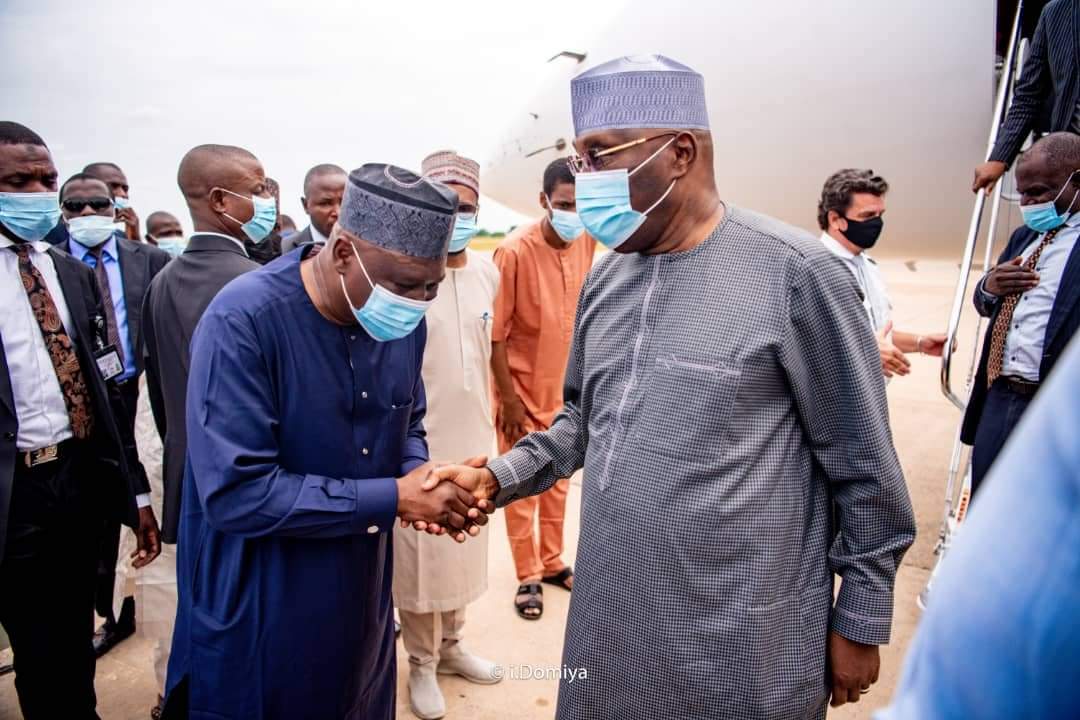 RE-2023: Will Governor Fintiri Support Atiku by George Kushi

RE-2033: Will Governor Fintiri Support Atiku by George Kushi

Once again Zayyad is up with what he considers as “delicate
political issues”pertaining to His Excellency Ahmadu Umaru Fintiri.

Surprisingly his discourse failed to fall in line with his assumption that Ahmadu Fintiri was not outright in pronouncing his support for His Excellency Atiku Abubakar. Zayad’s failure to read between the lines can be misleading to the politically naive. On a second thought, the writer might have done it not out of naivety ,but as a delbrate ploy to create disaffection between ardent Atiku Abubakar and Fintiri’s supporters.

This,however, has failed to score a point as Atiku Abubakar himself has confirmed their close relationship in Ribadu Square as PDP received decamping members including Nyako’s former SSG Kobis and several others on saturday from APC the party in control at the center.

To the core of the issue,one is inclined to believe that Zayad does not know Fintiri’s pedigree. The Fintiri that is known to serious observers is a strong willed person that does not bend easily on matters of loyalty to the party. As a politician watching the trends,his answers to the BBC reporter’s questions were apt. He cannot look into” the seeds of time”but has unequivocally accepted Atiku as a good leader of men and a fellow citizen of Adamawa state. In these words alone one does not have to gaze into a crystal ball to decipher the message inherent in Fintiri’s answers. Zayad’s idea of an “off beam” in Fintiri’s answers can be said to be “off key” as Fintiri was not thinking about any laws of power ,but about realities on ground. If Zayad is a well-wisher of the PDP ,he might as well have understood the drift of a seasoned politician that is waiting for the right time to act. Is Zayad doubtful of where Fintiri’s weight will go when the time comes? He will be blessed if he stops making a storm in a tea-cup.

Without an iota of doubt,Atiku Abubakar threw his weight behind Fintiri in his bid to unseat the APC government in power then. But can the same be said of most of the politician he named in his write-up? Some of those mentioned might have contributed in one way or the other,just like hundreds of thousands that voted in the election process. It is too early therefore to start casting aspersions and sowing seeds of doubt in the minds of people.
However ,if that is Zayad’s aim,he has gone “of beam”,”off key” and “off target” as his goal of creating distractions for Fintiri are non-starters.

Fintiri’s critics can have a field day making noise. They have nothing to show for the past several years. They criticised him as Speaker,he persevered,they tried to tarnish his image as Acting Governor,but failed,against all odds ,he became the party’s candidate and against greater odds and by God’s grace,governor.
They might not be surprised by his “treats”,which they cannot point out,but should have been surprised at his feats .

Evidently, the author does not know certain things of substance that transpired in those trying times before the last elections that saw Fintiri to office about the roles of some of those on his list. The past is dead,but the future is living. Fintiri is dedicating more energy go the living future and not the dead past.

When time comes, it will not only be clear to those that can’t read between the lines,but for those that can read in between and the two people in Zayad’s discourse,nothing is out of place.

What did His Excellency Abubakar Atiku himself say in Ribadu Square?
That answers the questions raised by Zayad.