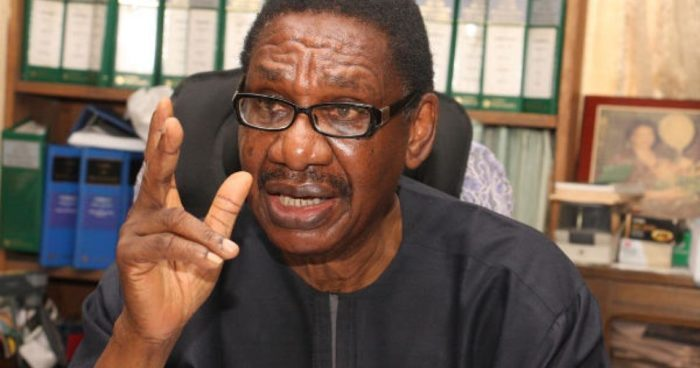 Nigerians have criticised Itse Sagay, a constitutional lawyer, professor and senior anti-corruption adviser to President Muhammadu Buhari, for saying finance minister Kemi Adeosun should remain in office even if guilty of forgery, but demanding the immediate resignation of Senate President Bukola Saraki on “moral grounds”.

The Nation newspaper quoted Mr Sagay as insisting on Thursday the Senate President was no longer fit for office after defecting to an opposition party, while dismissing a case of criminal forgery by the finance minister as inconsequential.

“I do not see anything serious about it,” Mr Sagay, head of presidential panel on anti-corruption, said in an interview that critics say has elevated the art of doublespeak to new levels.

Mrs Adeosun has been embroiled in the biggest certificate forgery scandal since former House Speaker Salisu Buhari’s inglorious exit in 1999.

PREMIUM TIMES uncovered Mrs Adeosun’s web of illegalities in an investigation published last month. Our findings revealed that the finance minister, who was born in the United Kingdom where she started and completed her education, failed to return to Nigeria to participate in the mandatory national youth service.

Since she graduated under the age of 30, the law required she must return to Nigeria to participate in the youth service, else she would be ineligible for public office. Mrs Adeosun returned to Nigeria between early and mid-2000s, but rather than enroll to serve her country, she forged documents to claim she had been exempted from doing so.
Based on the provisions of the National Youth Service Corps Act, the finance minister’s action was criminal and she would face long sentences if convicted.
More than a month after the scandal broke, Mrs Adeosun has refused to address it, prompting even those who initially accorded her the benefit of doubt to flip. In this time, drama over her status has continued amongst other government agencies and officials.