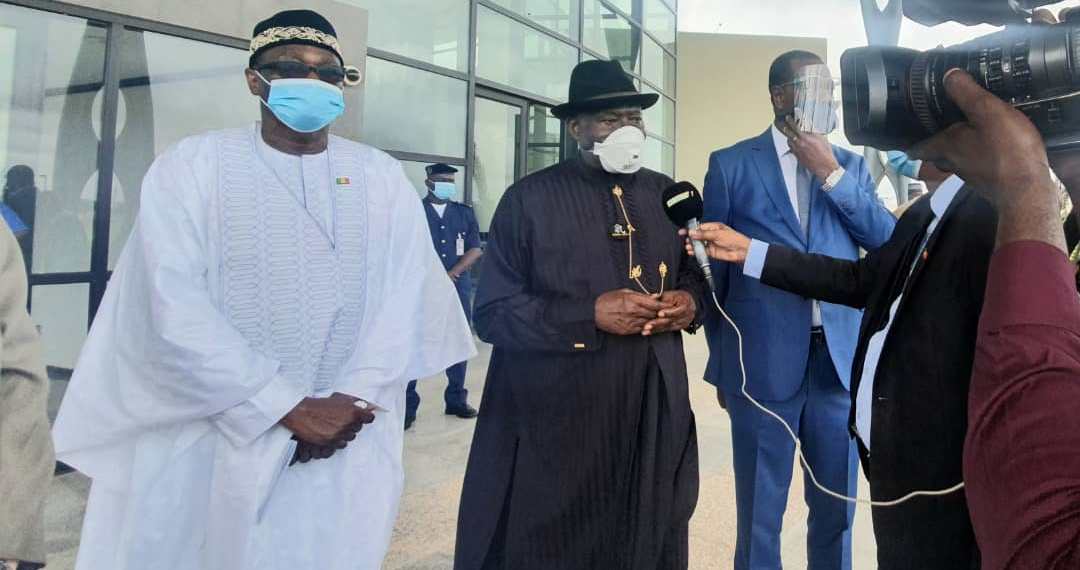 The newly sworn in President of Mali’s transition government Bah N’daw has praised the Economic Community of West African States (ECOWAS) mediator and former Nigerian President, Goodluck Jonathan for the role he played towards restoring normalcy in Mali, following a protracted socio-political crisis in the country.

Mr N’Daw stated this on Friday in Bamako at the inauguration of the Transition Government even as ECOWAS gave the indication that it would only lift sanctions on Mali after a new Prime Minister has been appointed to run the government of the administration.

Speaking on Mr Jonathan’s activities as ECOWAS mediator in Mali, the interim President thanked the former President for his deep involvement and encouragement towards resolving the crisis in Mali.

He said: “My gratitude goes to ECOWAS for its constant concern for our country. I also thank ECOWAS mediator, former Nigerian President Dr. Goodluck Jonathan for the wise advise he has been giving to his Malian brothers and sisters since June this year. He is one of us now.

“I welcome his presence and I would like to assure him of the determination of the Malians to lead a stable, peaceful and successful transition, under the agreed conditions and deadlines.

“I assure him (Jonathan) and ECOWAS that I am ready to make any sacrifice that will bring peace to Mali and make my country recover from its challenges. I will organise election on schedule and will not go outside the letters of the Transition charter.”

Sanctions
Meanwhile, there are strong indications that the sub-regional body will not lift the sanctions imposed on Mali until the leaders of the country comply with the decisions taken by the Heads of State and Government at the meeting held in Accra, Ghana, last week.

Mr Jonathan, stated this at a press briefing in Bamako on Friday, stressing that the sanctions will not be lifted unless the new administration appoints a prime minister to run the government.

A communique issued after a two-day visit to Bamako by the mediation team said: “Concerning the sanctions, in conformity with the decisions of the ECOWAS Heads of State and Government, following the swearing-in of the President of the Transition, they will be lifted once a civilian Prime Minister is appointed. A report on this issue will be submitted to the Chairman of ECOWAS.”

It stated further that the delegation demanded the immediate release of civilian and military personalities of the former regime who have been in detention since August 18, 2020.

One of them is the immediate past Prime Minister Boubou Cisse who Mr Jonathan and other members of his delegation visited in detention at the Kati Barracks last Thursday.

The communique said further: “The Mission recalled the importance and the urgency of appointing a civilian Prime Minister, Head of Government, who will be responsible for conducting, under the authority of the President of the Transition, the various reforms of the inclusive national dialogue and preparing for the forthcoming presidential and legislative elections.

“The Mission also reiterated the importance of obtaining the final and official version of the Transition Charter, taking into account the decisions of the ECOWAS Summits of Heads of State and Government.”

These decisions included the demand for the dissolution of the military administrative body known as the CNSP, the ban on the Vice-President in charge of Security and Defence, from replacing the President of the Transition, as well as commitment to the agreed 18 months duration for the transition Government.

While in Mali the mediator inaugurated a newly established ECOWAS Monitoring Committee on the situation in Mali which comprised of the mediator himself, chairperson of ECOWAS Council of Ministers, President of the ECOWAS Commission, special representatives of both the United Nations and the African Union as well as ECOWAS representative in Mali.

IPMAN Backs Fuel Hike, Says Members Will Not Be Part Of NLC Strike