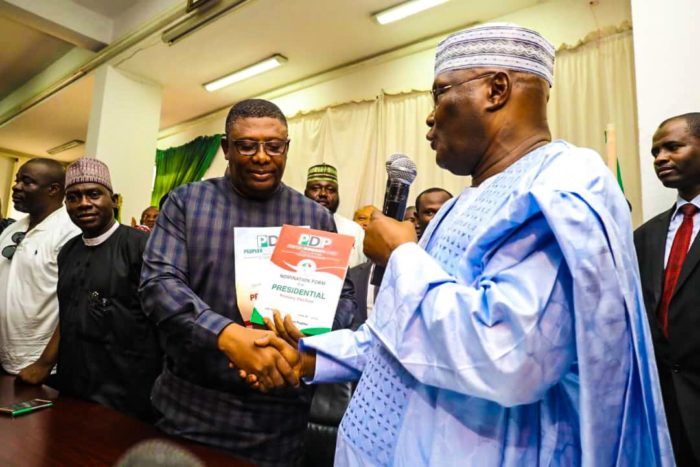 The battle line between the main contenders in next year’s general elections was finally drawn yesterday as former Vice President Atiku Abubakar emerged as the standard bearer of the opposition Peoples Democratic Party (PDP).

Atiku, who is making his fifth run for president, will face the incumbent, Muhammadu Buhari, whose candidacy was affirmed yesterday at the convention of the All Progressives Congress (APC) in Abuja.

Prior to the commencement of the convention, held in Port Harcourt, efforts were made to prevail on some of the 11 aspirants to step down for Atiku, Tambuwal or Saraki to no avail.

Sources told The Guardian that some governors of the south south and eastern states swung the votes in favour of Atiku, whom they felt stood a better chance of defeating the APC in 2019.

Tambuwal had been tipped to win the primaries, as a result of backing from River State Governor Nyesom Wike and others. But a decision by Atiku’s team to book hotels in advance for delegates was a clincher that also gave the aspirant easy access to voters.

The Guardian learnt that the aspirants financially induced some of the delegates. Those from Rivers State were specially barred from receiving tips from Atiku’s camp. They were reportedly directed to vote for Tambuwal who polled 100 per cent vote from the state.

Wike was said to have informed his colleagues that the reason behind his support for his Sokoto State counterpart was that the caliphate would make crucial inputs in the process of weaving other emirs for a groundswell of support in the north for Tambuwal to defeat the candidate of All Progressives Congress (APC), President Muhammadu Buhari in next year’s poll.

The attempt to entangle traditional rulers in active partisan politics was said to have peeved some of the PDP governors to the extent that governors opposed to a Tambuwal presidency wondered why Wike should arrogate unto himself the power to negotiate collaborations for other state governors.

Despite the opposition of other PDP governors, it was also disclosed that the entry of Senate President, Dr. Bukola Saraki into the presidential contest altered the equation by detracting from the youthful argument that was working in Tambuwal favour.

Those who argue that the entrance of the Senate President dimmed Tambuwal’s chances, claim that Saraki’s 317 votes would have naturally gone to the Sokoto State governor, adding that Tambuwal’s 693 and Saraki’s 317 would have put the ticket beyond Atiku.

Yet it was also said that Saraki’s 317 vote haul was due to his late entry to the race coupled with frequent distractions orchestrated by the Presidency and the ruling party that did not want a Saraki on the presidential ballot to compete with Buhari for the crucial Southwest votes in the general election.

Retired generals from the north threw their support behind Atiku, ostensibly to ensure that the caliphate did not become so powerful as Wike wanted. An added advantage was Atiku’s experience in the management of delegates and presidential elections, which his political groupings like Peoples Front of Nigeria and Peoples Democratic Movement have been doing from the 1990s, which culminated in the trouncing of PSP group to seize the then Social Democratic Party (SDP).

In his acceptance speech, he described the primaries as the most credible and transparent since the country returned to democratic rule. He lauded all the aspirants for placing unity, purpose and commitment to the party and Nigerians above individual interests. He declared his readiness to work with them towards victory at the general elections.

“We cannot afford to fail Nigerians at this very historic moment because they are yearning for the return of the PDP to power. They know that under PDP they had years of prosperity, unity, security and development. They have seen the gross mismanagement of the APC government. Therefore, we have a wonderful opportunity to return the PDP to power in this country.”

In a peace overture, he also addressed his fierce critic, saying: “On a personal note, I wouldn’t have been standing where I am standing today if my former boss, President Olusegun Obasanjo, had not made me his vice president. Under his tutelage, I learnt quite a lot and I believe the experience I got is going to definitely impact on how we govern this country. I wish to pay my personal tribute to him.”

Obasanjo had said he would not back Atiku, swearing: “God will never forgive me, if I do.”

High-level consultation and political horse-trading seemed to have forced the PDP to defer the nomination of its vice presidential candidate.

INEC in an election time-table published earlier this year had made it compulsory for all political parties to submit the names of persons nominated for elective offices not later than October 7.

But checks by The Guardian showed that though the ticket for the office of president and vice president is supposed to be a joint affair, the opposition party is not yet ready to announce a nominee.

PDP’s National Publicity Secretary Kola Ologbondiyan confirmed in a telephone interview that the party would take advantage of provisions in the Electoral Act that allow the submission of only the president’s name and that of his vice president at a later date.