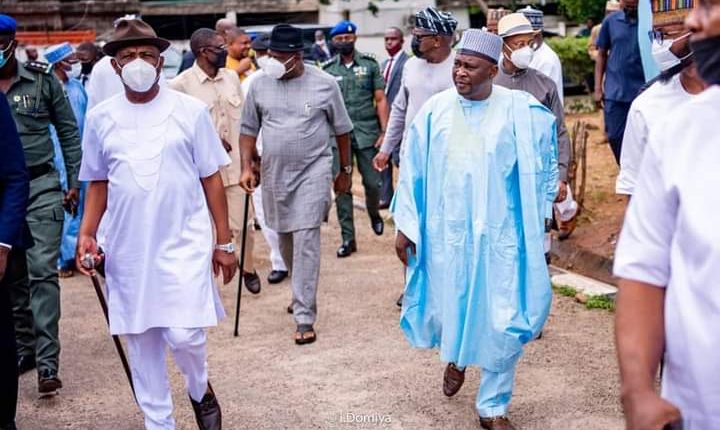 As the PDP National Convention is fast approaching, certain vital issues are front burners in the agenda of the party which lost the Presidential election six years ago . Although the loss to the APC in 2015 remains contentious, a strategized PDP is in the offing as it prepares for the battle in 2023

The battle royale in 2023 is a daunting task facing the PDP, but at the moment the task of structuring and mobilising the much needed formidable force to unseat the APC has been thrust on Governor Ahmadu Umaru Fintiri of Adamawa State following his appointment as the Chairman of the convention planning committee. This onerous task entrusted to him can only mean one thing: the party has absolute trust in his ability to impartially supervise and implement policies that will ensure the smooth running of the convention and ultimately, victory for the party.

The task ahead of Fintiri is enormous and daunting to an average man, but his credentials in the past have proved that the “INDOMITABLE OVERCOMER”who against all odds defeated his opponents in the last general elections has the mettle to organise and execute a credible, transparent, free and fair Convention for the PDP.

In the first instance, the party has of recent been wracked with internal scuffles personified by Some “Bigwigs and embattled Secondus over the contentious issue of the party’s chairmanship. As it is, Governor Ahmadu Umaru Fintiri has the responsibility of seeing that this titanic battle between these bigwigs does not mar the forth coming convention.

The PDP just like all political organisations and movements all over the world is not without internal wranglings . It would also be recalled that the rival APC headed by President Mohammadu Buhari has continued to be bedevilled by serious internal wranglings that has affected it in many states. This to a high degree has affected the APC in their ward and local government congresses across the states of the federation.
As the PDP works towards its national convention, the ward congresses have ended with no rancour across the country, a clear sign that the party is on the right footing.

So far, Fintiri’s leadership acumen has in the face of the daunting task ahead mobilized high calibre stakeholders in an effort to see to the actualisation of a hitch free Congress . In the same vein, high powered sub committees have been set up to ensure the smooth running and a hitch free convention. To achieve these, various sub committees have been set up which include, The Venue sub committees, Screening, Transport and logistics, constitution amendment, screening appeal, accreditation, security, electoral, publicity, entertainment and welfare , protocol, special duties, and a secretariat to oversee the running of the convention affairs. The rancour free constitution of the committee indicate that the party is moving in the right direction.

It is no mean feat that Ahmadu Umaru Fintiri is able to cope with the responsibility of effectively running Adamawa State and organising a convention of national magnitude without rancour from the diverse people that make up the PDP family.

Governor Ahmadu Umaru Fintiri understands the need for a unified , cohesive and all including party being a withness of how internal problems cost the PDP Adamawa State in 2015. He is therefore in good stead to ensure that discrepancies that ruined the election for PDP in Nigeria as a whole does not rear it’s ugly head this time around. A listening politician and a proactive one , the PDP convention has been entrusted in the right hands . As should be expected, the task ahead is a harculean one given the fact that not only will the opposition party be interested in seeing that the PDP fails and by extension Fintiri is having a harmonious and successful convention. Fifth columnist repressing the opposition party, antagonists of individuals in the party structure, sponsored media moles and political no goooders will try to sabotage or give negative narrations of what is afoot.

However, one thing is evidently clear that Ahmadu Umaru Fintiri who has been through the political furnace and has come out pure gold will take the day. Attempts to clog the machinery he has set up will fail due to the careful planning involved , the doggedness of the personality involved and the goodwill of well meaning members and supporters of the party.

With Governor Ahmadu Umaru Fintiri at the helm of the PDP National Convention Planning Committee, the party has clearly portrayed the fact that it is ready for change: change for the better. For the first time young and energetic people have been placed in charge of planning a monumental event like this for the PDP. Names too numerous to mention have been included in the plan that will transform and translate the PDP into a united family made up of new breed of tested politicians to usher the nation into the next stage of national development.

Ahmadu Umaru Fintiri is in the picture and in the centre stage of transformation of the PDP as it galvanizes forces to wrest power from the ruling APC come 2023.

George Kushi is the Chief Press Secretary to the Deputy Governor of Adamawa State and writes in from Government House Yola.