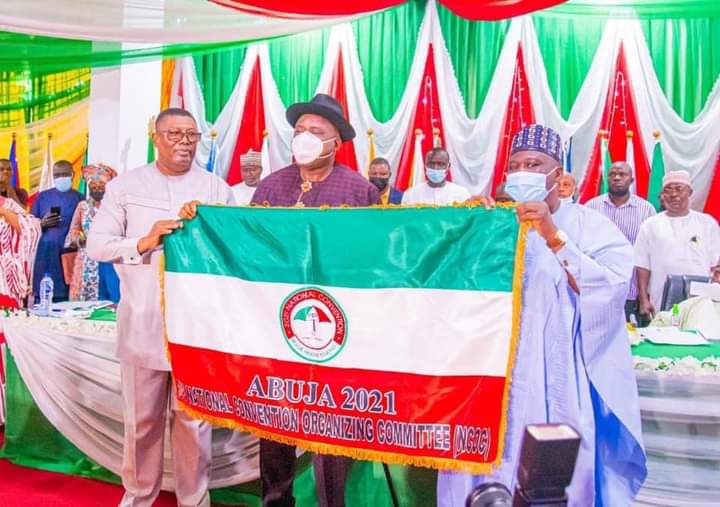 The Governor Ahmadu Umaru Fintiri led National Convention Organising Committee has been Inaugurated on Friday at the National Headquarters of the Party Wadata Plaza Abuja.

Presenting the flag of the party at the brief event to the Convention Chairman, the Acting National Chairman of the People’s Democratic Party, Elder Yemi Akinwonmi noted that the Committee members were carefully selected based on their antecedents and charged them to ensure a better Convention from the previous one adjudged the best ever in Nigerian politics.

In their goodwill messages, both the Board of Trustees Chairman Ambassador Wali Jibrin and the House of Reprentatives Minority leader Ndudi Elumelu described the inauguration as the beginning of the repositioning of the party towards taking over the reigns of governance in Nigeria.

They expressed confidence in the capacity of Governor Ahmadu Umaru Fintiri and the Committee to make a difference and must therefore not fail Nigerians who are yearning for a better Nigeria.
Responding on behalf of the members, Chairman of the National Convention Organising Committee and Governor of Adamawa State, The Rt.Hon Ahmadu Umaru Fintiri appreciated the confidence reposed in them by the party. 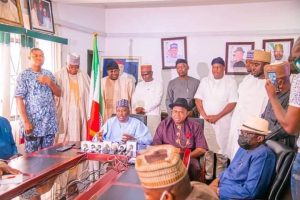 Governor Fintiri did not mince words in assuring the party of the Committee’s readiness to deliver one of the best Conventions considering the calibre of members of the Committee.
“I will not fail you, but will will give you one of the best Conventions ever”. Governor Fintiri said.
The Governor noted that the nation is in extraordinary times and need extraordinary spirit to deliver Nigeria from further destruction.

He said the Committee will count on everyone’s support to deliver a successful Convention, and appealed to the Zoning Committee to hasten the process of zoning.

Rt Hon Ahmadu Umaru Fintiri was quick to commend the National Working Committee, Board of Trustees, National Executive Council and the entire PDP family for working assiduously to bring the party where it is today.