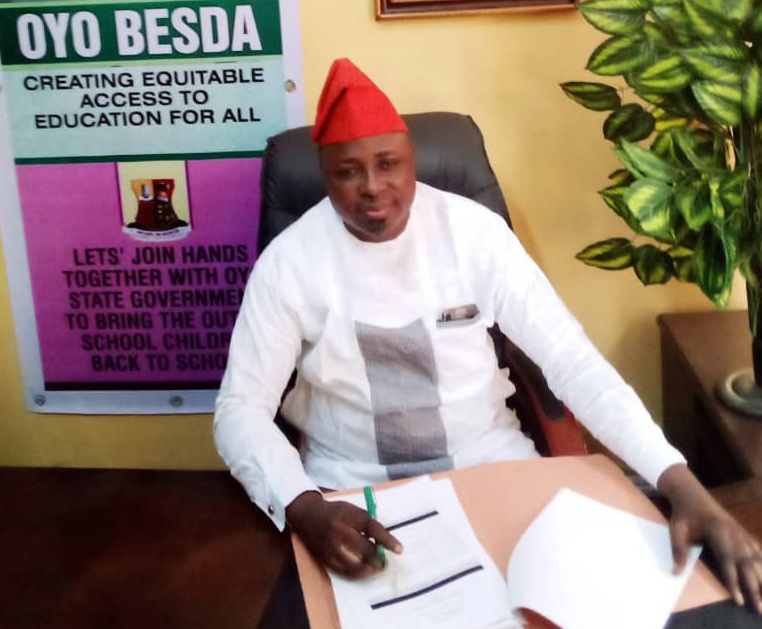 The Oyo state government has declared it readiness to tackle the menace constituted by out of school children in the state. This was stated this Wednesday by the Senior Special Assistant to the Governor on Better Education Service Delivery for All, Honourable Adeyanju Sunday Moses while addressing newsmen in his office at Agodi, Secretariat.

He commended Governor Makinde for having the political will to eradicate the barriers impeding the access to better education in the state through his education policy. Hon Adeyanju opined that the present administration in the state is ready to take formal education to the vulnerables and destitutes in the state

Hon. Adeyanju acknowledged that if there is anyone that does not have interest in formal education, the present government is ready to take education to them. He used the opportunity to enlighten the public on what BESDA stands for.

He noted that the program would also target those in the quranic schools to ensure that their arabic learning complement the formal education.
He asserts that Better Education Service Delivery For All is an intervention programme supported by the state Government, Federal Government and the World Bank. Honourable Sunday Adeyanju further the data survey as of 2015 showed that about 13 million children were out of school and Oyo State was among the state with the highest number of the menace hence why the state is among the beneficiaries of the scheme. He said in an idea system, education should be free but in the case of Nigeria,it is a different ball game.
Speaking on why there is upsurge in the mumbers of out of school children in Oyo State, Honourable Adeyanju unequivocally state that children mostly from other parts of the country who were internally displaced by insurgency, banditry, kidnapping and farmers herders clash constitute the highest percentage of out of school children in the state.

He condemned parents and guardians using little children that are of school ages in child labour and street urchin.
Honourable Sunday Adeyanju however confirmed that Oyo State BESDA has been able to access a sum of $3 million from the World Bank noting that the targeted Disbursement Link Indicators which will enable the state to access more funds when the initial results have been accomplished. He said the state has accessed the first phase which is what his office and the state Government are working on.

On the methodology to be adopted by BESDA, Honourable Adeyanju said the literacy system to be used would be totally different from the conventional one method, but literacy would be taught in their mother tongue (indigenous language). He said this approach would be less cumbersome compare to the normal school setting.

The Governor’s aide said another area BESDA will focused on is the informal sector noting that those that think they are out of school ages will benefit from the scheme. He said informal education would be brought to their door steps. He said children who enrolled at different Quranic schools would benefit from the scheme. He however said both Quranic and formal education like literacy will go simultaneously. He allay the fears of parents who want there children to go for Quranic and Arabic classes instead of the formal education, he maintained that trained facilitators will be sent to the centres to train why their Imams monitor the activities.