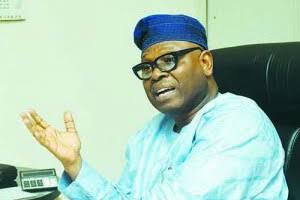 The Secretary to the Oyo state government Alhaji Ismael Olalekan Alli is the latest amongst the plethora of aspirants who have indicated interest to contest the governorship elections in 2019. Alli formerly threw his hat into the ring Friday when he declared his intention to run for the number one seat in the state on the platform of the ruling All Progressives Congress, (APC).

Sunrisebulletin.com gathered from a reliable source, informed that the decision to join the governorship race in the state came after due and diligent consultations with party leaders, elders, his principal, the governor of the state, Abiola Ajimobi, other stakeholders and his immediate family.

Ali, a 61 year old graduate of the Obafemi Awolowo University, Ile-Ife, also excelled in the private sector before becoming the scribe of the state government. He is an administrator per excellence, Diplomat, and Chief Executive of different multinational companies before attaining his present position.

Alli, who was Governor Ajimobi’s junior in secondary school at Lagelu Grammar School hails from Ibadan North Local Government Area of Oyo State. He had served the state as SSG at the twilight of Ajimobi’s first term, before his appointment was renewed and maintains a worthwhile relationship with his boss.

Prof. Sagay criticised by Nigerians over Comments on Adeosun