Oyo State has rounded off its sterling performance in this year’s National Festival of Arts and Culture (NAFEST) tagged Edo 2019 by winning gold, silver and bronze medals.
The State contingent came 5th out of 29 states that participated in this year’s edition. The feat achieved by Oyo State has been adjudged the best in the history of its participation.

According to the panel of umpires, Oyo State would have come 3rd, but due to the tallying of points by Ogun, River, Edo, Bayelsa and Delta States for the 1st, 2nd and 3rd ranks, Oyo State dropped to the 5th position. 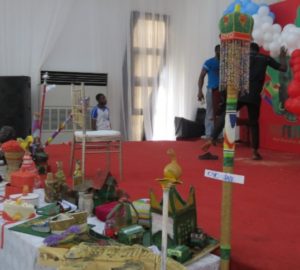 In distinguishing the brilliant display by the state contingent, its children cultural dance troupe was rated the best and made to perform before Her Excellency, the Wife of Edo State Governor, Mrs. Betsy Bene Obaseki.

As announced at the end of the event, Oyo State came 1st in Children Cultural Quiz, 2nd in Children Arts and Craft, 4th in Traditional Board Game( Ayo) and 5th in Drama competitions.

While receiving the awards and certificates on behalf of the Oyo State Government, the General Manager, Oyo State Council for Arts and Culture, Mrs. Olayinka Adedeji, praised the contingent for making the State proud.

She commended the current administration led by Engineer Oluwaseyi Makinde for the moral and financial support given to the state to participate in this year’s event. The last time Oyo State attended the annual festival was in 2012.

In his reaction, the Commissioner for Information Culture and Tourism, Dr. Wasiu Olatubosun lauded the delegation for the sterling performance in the Culture and Arts carnival.

He also commended Governor Seyi Makinde for the support given to the troupe to showcase the rich cultural heritage of Oyo State.

Dr. Olatubosun therefore promised to resuscitate and promote the cultural heritage in all the local government areas of the State.

We Will Make Oyo Fastest Growing Economy In Nigeria—Gov Makinde