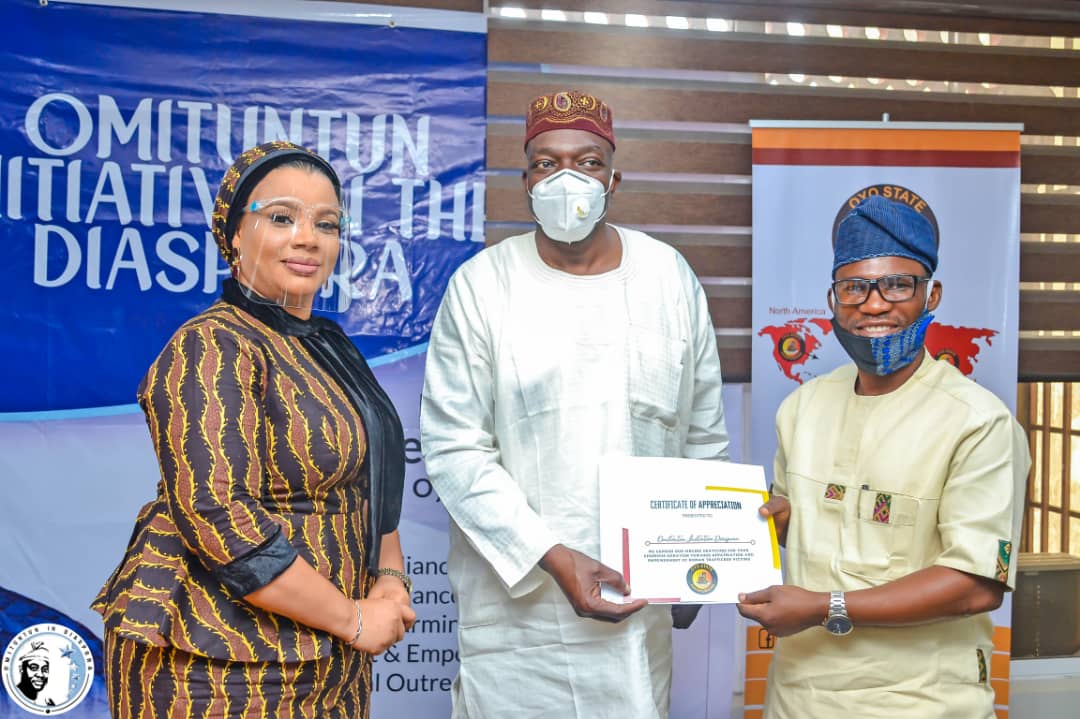 The Oyo state state government through office of the Special Assistant to the executive governor of Oyo state on Diaspora Matters has initiated a fund raising program targeted at helping the state government repatriates stranded Nigerians scattered across the world and are willing to return home.

Mrs Bolanle Sarumi-Aliyu, made this known at the presentation of donation of N1m (1,000 000) from Omituntun Initiative in Diaspora (OID) to the office of Diaspora Affairs on Friday at the Conference room of the ministry of finance, Oyo state Secretariat, Ibadan.

Earlier, the Chief of Staff to the executive governor of Oyo state, Chief Oyebisi Ilaka, in his welcome remark commended Mrs Sarumi for a tremendous work done within a short period describing her as a lady amazon at the forefront of combating human trafficking of any kind in the state and Nigeria.

Chief Ilaka, explained that Mrs Sarumi’s official purview is quite multidimensional adding that it was for that reason she has the mandate of the governor to look for investments into the state and also demonstrate to those who are based abroad to make Oyo state their first point of call in term of investment noting that the state government has invested heavily in the state security architecture with a view to guarantee investors and investments adequate security in the state.

The National Coordinator of OID, Prof Olufemi Sabiu, earlier in his introductory remark stated that the decision to make the donation to the Oyo state government was born out of trust, qualitative leadership, and political will of the Seyi Makinde led government as well as the quality of experts in charge of state affairs which is evident in the transformation being witnessed already.

He added that even though the group is a composition of Nigerians from different state of origins, its mandate is to continue to promote one Nigeria and to be each others brothers keeper through providing supports and necessary assistance.

Mrs Sarumi, explained that the Diasporan office has been very busy working with foreign high commissions especially The United Arab Emirate (UAE), Oman, and Qatar with the aim of repatriating stranded Nigerians who are been engaged in what she described as modern day slavery in foreign countries.

She said that her office in collaboration with other federal government agency has successfully repatriated no fewer than 9 persons back to the country last week and are currently undergoing the mandatory 14 days COVID-19 isolation in Abuja after which they will be resettled back in secured apartments.

Mrs Sarumi, however called on well meaning Nigerians both home and abroad to make donations towards what she described as a very noble course in order to show the world that Nigerians are united against trafficking of its people in any part of the world adding.

Highlights of the event was presentation of awards by OID to Secretary to the State Government (SSG), Mrs Olubunmi Olubanwo for being the first female to occupy such exaulted office since creation of Oyo state, Special Assistant to the governor on Diaspora Affairs, Mrs Bolanle Sarumi-Aliyu, Mr Kazeem Bolarinwa.

Oyo N100b Bond: Your Failure And Mismanagement Of Our Economy Is Why We Are Where We Are, So Shut Up – Oyo PDP Blasts APC