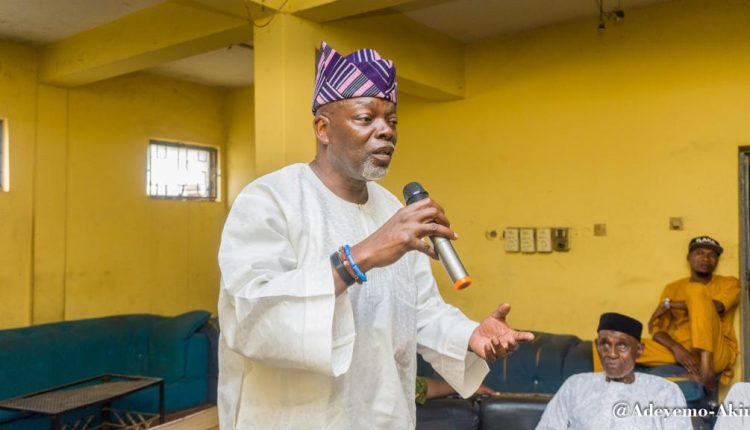 Ilaka got the vote of confidence today at a meeting he held with the Ward Chairmen at his campaign Office Idi-Ope, Oyo.

Speaking on behalf of the Ward Chairmen, Mr. Kayode Adediran from Afijio local government, noted that the ward Chairmen had resolved to put their weight behind the ambition of Chief Bisi Ilaka as Senator representing Oyo Central. He affirmed that after careful consideration Ilaka is the most credible and the one worthy of their support amongst the aspirants. He thanked the PDP Senatorial hopeful for meeting with them, emphasizing that his meeting with them is a clear indication that Ilaka appreciates the very important role they play in the grassroot. 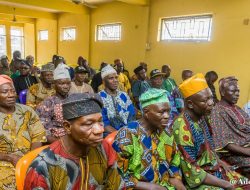 Adediran further described the Oyo born lawyer and Tax Consultant as an experienced politician who has been consistent with his love and care for the people of Oyo Central through his “ANFANI FOR ALL’ Foundation.

Earlier in his brief remarks Ilaka appreciated the Ward Chairmen, for the support they’ve shown to him. Ilaka who is the Ladilu of Oyo Kingdom, emphasized the role of the ward Chairmen in the electoral process, describing them as the Pillar of the party because they are closest to the grassroot.

He said the essence of the meeting is to encourage them to be prepared for the coming primary election and should not leave anything to chance, Furthermore he noted that the meeting also creates an opportunity to bridge whatever gap that may exist before the elections.

Ilaka who was the PDP Oyo Central Senatorial Candidate in the 2019 elections also encouraged members of the party and ward Chairmen to mobilize aggressively for the success of the re-election of His Excellency Engr Seyi Makinde, pinpointing that “The continuity of the present administration will give room for accelerated development in the State”

Also speaking at the meeting Hon. Siju Lawal, former former Party Chairman Oyo East local government area urged the party’s ward Chairmen present to work rigorously in ensuring that Ilaka emerged both at the party primary and the forthcoming general elections. Stressing that no candidate can emerged without the support of the ward Chairmen, while thanking them for their endorsement of Ilaka .

It will be recalled that the Oyo Central Senatorial aspirant also held a similar meeting with all ward chairmen of the People’s Democratic Party in the Ìbàdàn zone of the senatorial district, Monday (Akinyele, Lagelu, Egbeda, Ona-Ara and Oluyole Local Governments). Where he also received overwhelming support for his aspiration.