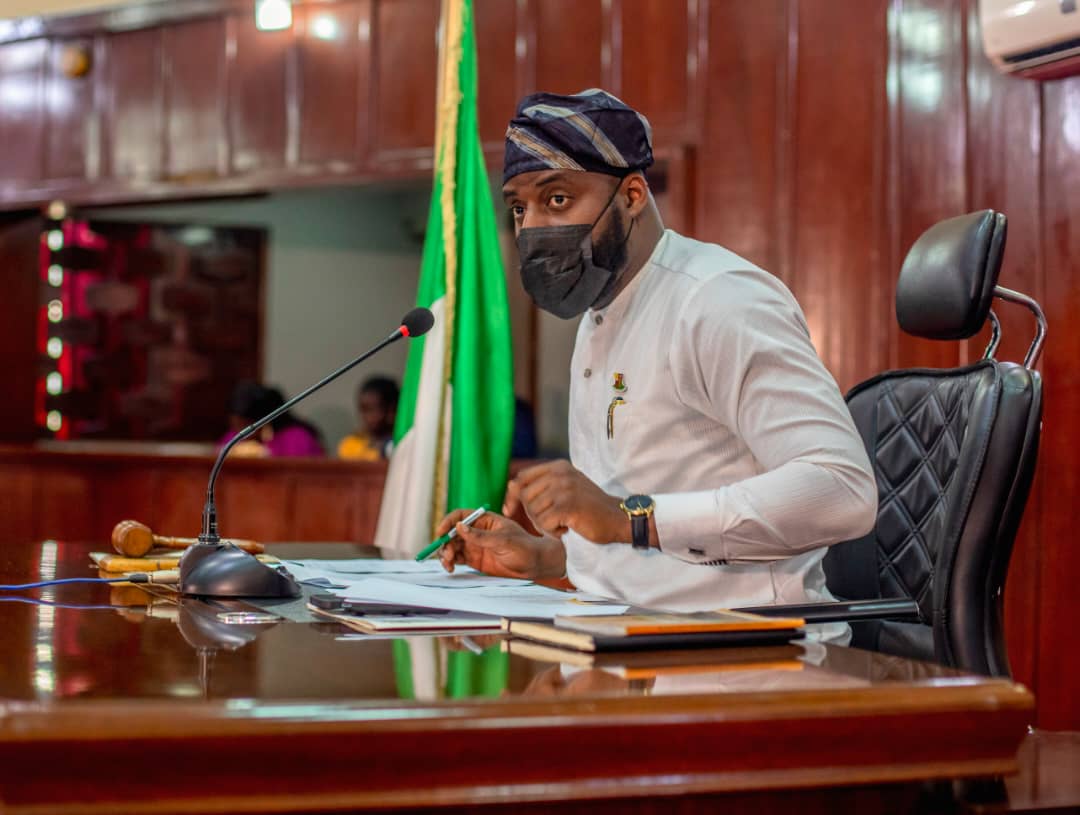 The Oyo State House of Assembly has frowned at the exploitative manner in which Estate Agents and Landlords take advantage of the dilemma most prospective tenants find themselves when seeking for new apartment for residence or business.

The Speaker Oyo State House of Assembly, Rt. Hon. Adebo Ogundoyin who moved a Motion on the floor of the House on Tuesday called for urgent need to curb illegal charges and extortions by estate agents.

According to the Motion by Ogundoyin co-sponsored by Hon. Babajide Adebayo representing Ibadan North II during the Tuesday plenary, the lawmakers noted that it is becoming rather difficult these days for prospective tenants to rent houses or shops without going through middlemen usually called Estate Agents.

According to the motion, there is a rise in cases of people being duped and extorted by Agents who collect or charge illegal fees from them, adding that some dubious agents even abscond after collecting money from prospective tenants leaving no traceable address.

“Fraudulent and greedy Agents usually charge exorbitant fees. They collect fees like Agency fee, Agreement fee, Caution fee ( suppose to be refunded), Llegal fee, Inspection fee among others. Some even request for registration fee. When they give you what they call ( TOTAL PACKAGE) for the rent you will be speechless.” Ogundoyin said.

Babajide in his submission said that there is the need for the State government through the ministry of lands, housing and physical development and other professional bodies like the Nigerian Institution of Estate Surveyors and Valuers and the Association of Estate Agents in Nigeria to regulate and bring some sanity into the practice.

He said: “All their charges are rather too high and exploitative. There should be ways of reducing the activities of quacks in the practice. Potential tenants must also resist any attempt to make them pay exorbitant fees, or negotiate better to avoid shortchanging.

“Security agencies should help investigate and bring some unscrupulous agents and surveyors whose criminal activities are capable of bringing discomfort to the people to book.”

Sunrisebulletin.com learnt that the tenancy law in Oyo State was birthed in 2016.

According to the Oyo House during the 8th Assembly, the Tenancy Law would serve as checks and balances for tenants and landlords.

Chairman of the Committee on Information, Joshua Oyebamiji during the 8th Assembly maintained that the law would serve as a control measure on the excesses of both landlords and tenants.

However, after about 5 years after the Tenancy law was birthed there hasn’t been any improvement on the plights of prospective tenants in the hand of Estate Agents which has led to the House under the leadership of the Speaker, Adebo Ogundoyin, expressing serious concern and making another move to put an end to the exploitative manner of the estate agents.

Speaking further before Ogundoyin’s motion was passed, the Speaker noted that many people are now moving into Ibadan for residence and commercial purpose because of the urbanization and infrastructural development going on across the State.

He however, lamented that a tenancy agreement which should be about 10 percent, now costs prospective tenants as high as the actual rent itself.

“Can you imagine someone getting accommodation in Ibadan and the total package is N900,000. When this is broken down, the rent may be about N500,000 while other charges by the Estate/House Agents will be N400,000. Almost the same amount as the rent. This is really exploitative and exorbitant.

“We urge the Oyo State Government through the State Ministry of
Lands, Housing and Physical Development, as well as other
professional bodies like Nigerian Institution of Estate Surveyors
and Valuers (NIESV) and the Association of Estate Agents in
Nigeria (AEAN) to help regulate the activities of Estate Agents
and Surveyors across the State.

“Let the professional bodies put machineries in place towards
addressing the excesses of Estate Agents and Surveyors in the
State, and members of the public and other stakeholders to go all
out against quacks and fake Estate Agents and Surveyors whose
fraudulent activities and charges are already giving the practice a
bad name,” The Speaker added.