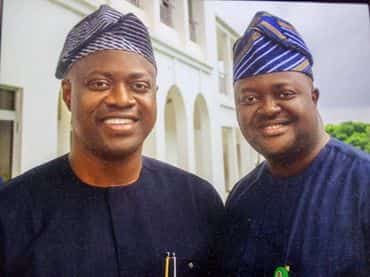 The lawmaker representing Lagelu state constituency popularly called AKT has expressed his profound gratitude to God for his life and family as he becomes a year older tomorrow November 19Th, 2019. AKT who doubles as the PDP party whip of the 9th assembly as well as the chairman house committee on commerce and cooperatives added that his experience during the preelection and post election period are particularly reasons he must continue to be thankful. Some of his colleagues and political associates shower encomium on the vibrant lawmaker.

AKT Is A Symbol Of Leadership —Hon Olushola Owolabi (IBNE II)
“AKT was my senior in secondary school back then at Loyola college so he is someone I know very well couple with the fact that he hails from Lagelu the headquarter of Ibadan. The 9th assembly made no hesitation to make him the leader of PDP lawmakers considering his leadership skills and qualities, AKT is just the kind of man you always want to have on your team because he’s a man with God’s wisdom, a man who knows how to stand up for his people in protection of their interest and I can tell you for the record that the 9th assembly is blessed to have AKT, I join his family to celebrate him and wish him more fruitful years of success and greater heights.”

AKT Is A Role Model To Us Younger Legislators —Hon. Yusuf Adebisi Oladeni
“I am really short for words to describe AKT because he’s like a father to me personally, I feel so blessed knowing and working with him as a lawmaker because his wealth of knowledge is always sufficient to guide you any time one seeks for it. I join my heart with others to celebrate one of the leaders of the 9th assembly as he celebrates his birthday and pray God continue to increase him in all sides.”

AKT Is My Brother From Another Mother —Hon. Sunkanmi (Egbeda)
“AKT is the reason why I agreed with the notion that brotherhood is not defined by blood but by relationship and love and those are the why I call him my brother from another mother. AKT is an exceptional leader, he is like a compass when we need direction at the PDP caucus in the house, he is a warrior, a man who can rise and fight for his own any day, he is such a leader we will gladly position for greater responsibility if need arise because of his leadership qualities, I wish him a happy birthday in good health and greater heights.”

AKT Is A Man Of The Common Man —Lagelu Local Govt Party Chair
“One of the qualities that stands Hon. Akintunde out of all others among his contemporaries is his humility and the sense of belonging he gives to everyone regardless of your social status, I believe his current position is just a stepping stone to greater heights in his political journey because he has everything that will make anyone who is politically inclined to desire him in his or her team. He has attracted government physical presence to our local council since he became the lawmaker representing us and we will be glad to position him for greater responsibility if or when the need arises and I want him to know PDP as a family is solidly behind him. I wish my honorable a very happy birthday and many more of greater achievements.

AKT Is A Man You Can Trust Whenever You Need Leadership And Direction —Hon. Ayo Fatokun (Chairman Parliamentary)
“We as PDP family of the 9th assembly are very proud of the leadership style brought to the house activities by Hon. Akintunde whom we all fondly call AKT, He is very reliable, consistent, proactive, and forthcoming anytime you need him or his advice, I celebrate him as he celebrates his birthday and I wish him more prosperous years on earth and greater heights in his political career.”