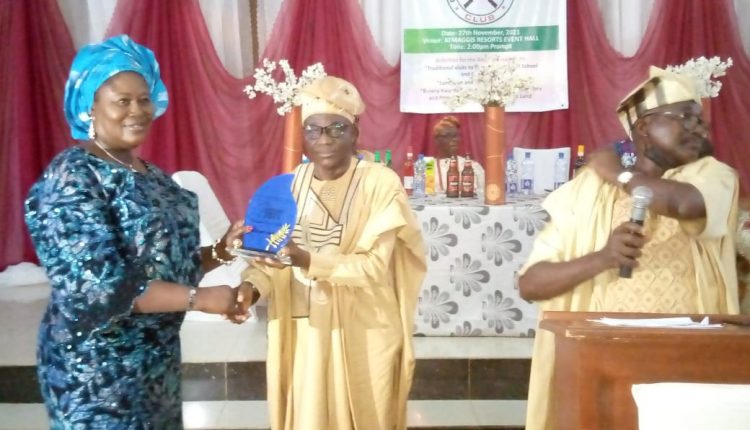 The only woman in the 9th Oyo State State House of Assembly, Honourable Bimbo Olawunmi Oladeji on Saturday (yesterday) received the prestigious award of Excellence from the reputable Ogbomoso Valiant Club (OVC) in recognition of her contributions to the development of Ogbomoso North.

OVC according to organizers of the annual award ceremony, the Club is a body of veterans, captains of industries, respected politicians, highly distinguished sons and daughters of Ogbomosoland who have been very successful in their various chosen careers and field of professionalism with the primary aim of pulling individual resources together towards the development and advancement of Ogbomoso via community development service, provision scholarships, among others.

The Club which has been in existence for over a decade was officially incorporated into Ogbomoso, Nigeria, in 2016 with notable Nigerians of Ogbomoso origin such as Brig. Gen. Yusuf Brimo (rtrd), Dr Saka Balogun, Air/Cdre Atanda Layiwola (rtrd), Major Gen. Popoola Oladapo (rtrd), Senator Ayoola Adeseun, present Oyo State Commissioners for Justice and Attorney-General of the state: Oyelowo Oyewo SAN, Trade, Establishment and Training: Barrister Olasunkanmi Olaleye, amongst others.

Receiving the award on Saturday November 27 in Ogbomoso, Honourable Wumi Oladeji who could not contain her joy dedicated it to the entire members of her state constituency in Ogbomoso North as well as the Ogbomosoland in general saying that the recognition will be a propelling tool that will fire her up to rededicate herself and renew her commitment to the development of Ogbomosoland.

In her brief remarks shortly after receiving the highly coveted award, the two term lawmaker who is the Chairperson, House Committee on Women Affairs and Social Inclusion expressed her joy in the immediate implementation of Oyo State Maternity Laws which she personally sponsored as a Bill and is now in use in the state.

“The law which provides for between three to six months Maternity Leave for our nursing mothers is now in use in Oyo state. Our nursing mothers are now enjoying it. On behalf of my humble self and the little God has done for me, I want to humbly say thank you for honouring God in my life.”

Speaking with journalists shortly after the event, Hon. Oladeji explained that thr award means so much to her because of it’s prestige and the reputation of great personalities behind the award who according to her are the people building Ogbomosoland saying “if these set of people can recognize you with this kind of award then forget it, you’re already in for greatness.

“God has been so wonderful to me. Everything they have said is just the truth there’s no doubt about it and it is due to my activities at the House of Assembly and my little contribution to the overall efforts of other respected personalities of Ogbomoso origin in the development of our land, hence, their decision to honour me with this award and i must tell you that I’m the happiest person today because I deserve it.” She said.

Speaking on what her constituents should expect from her Hon. Oladeji said the people of Ogbomoso north and the entire state should expect more Bills and Motions saying that she has been doing a lot already and also willing to do more noting that the award has placed more responsibility of leadership on her.

She said: “Like I said when I was receiving the award, this award given to me today will embolden and propel me to do more in the service to humanity, Oyo State, and Ogbomosoland as a whole.”

Advising other women in politics especially the upcomers, Hon. Oladeji maintained that it is imperative to watch the foot steps of great personalities and successful politicians who can be emulated to serve as a guide for them in the male dominated political landscape urging them to endeavor to always speak truth to power regardless of the odds.

“Nobody is an island, we are learning on the job everyday, I am not a lawyer myself but I have endeavored to create a path for myself and I have been performing excellently well in the House of Assembly and I hope to continue to improve because I am not going to rest on my oars and I hereby, dedicate this award to the entire people of Ogbomoso North.” She said.

Hon. Olawumi who is regarded for her vibrancy in the House of Assembly earned herself the unofficial title, ‘mother of the ninth Assembly’ being a frontline advocate against child abuse, domestic violence, as well as violence against women and persons amongst others.

Other top personalities who were also awarded in absentia are the Oyo State Attorney general and Commissioner For Justice, Barrister Oyewole Oyewo, Commissioner for Trade, Establishment and Training, Barrister Olasunkanmi Olaleye.

Three Weeks After Declaring Interest In 2023 Presidency, Tinubu Travels Out for…