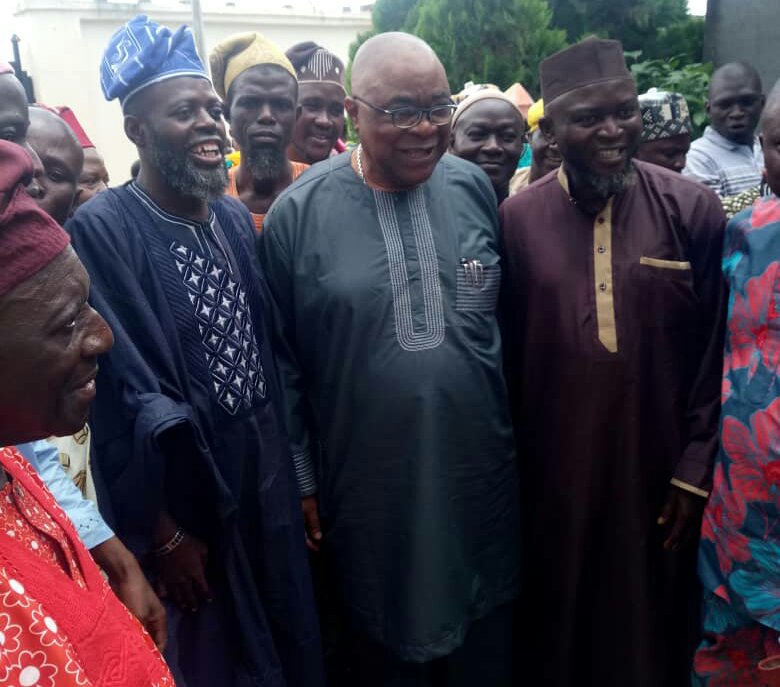 Former Governor of Oyo State and flagbearer of Action Democratic Party (A.D.P) in the 2019 general election, Otunba Adebayo Alao-Akala has assured the people of Oyo state of a Masses Oriented, People centred adminstration during his four year tenure as Governor of Oyo state beginning from May 29, 2019.

Otunba Alao-Akala gave this assurance while playing host to members of Olaiya support foundation led by Prof. Abideen Olaiya his running mate in the 2019 Governorship election who also doubles as the chairman of the foundation with membership drawn from across the 33 local government areas of Oyo state who were on a solidarity visit to his Ogbomoso country home to pledge their total commitment and dedication to the Akala /Olaiya 2019 Mandate.

The former Governor who oversaw the affairs of Oyo state between the year 2007 – 2011 said his primary mission is to return smiles to the faces of the people of Oyo state through developmental projects that will have direct impact on the lives of the citizenry.

According to him, any responsible and responsive government should prioritize it’s actions and fashion it out in a way it cater for the needs and aspirations of it citizens.

That is why there is what we call opportunity cost in micro-economics theory.

Our own adminstration cannot afford to trade with the Joy and happiness of the masses, we will prioritize our actions and place premium on developing human capital.

An hungry man is an angry man.

Payment of Salaries and Pension of our retirees takes priority before any other thing.

These are ways of ensuring a stable economy and improved standard of living for our people.

I can categorically tell you that I won’t dualise road when my people are hungry and are being owed salaries of 17-20 months.

During our first coming, that was our style and nothing will change that rather we have fashioned out ways of improving on our ways of making life more abundant for the good people Oyo state.

Our own adminstration will not misplace priorities, we will run Oyo state with the fear of God as our guiding light.

Speaking on his choice of Prof. Abideen Olaiya as his running-mate, Otunba Adebayo Alao-Akala said it was still a decision centred around his style of putting people first.

” If you take a careful study of this decision, you will see that we are on the right track.

Prof. Olaiya is a man of the people, his followership base is unprecedented.

He is a leader of men and this quality endeared him to me so much as we fall in the same category.

He is a movement on his own and when it comes to political structure, he is balanced and well positioned.

He is a scholar of repute, an unblemished politician whose track record speak for itself and a Professional in Politics not a professional politician.

In the religious circle, he is a core muslim who is committed to the teachings of the Holy Prophet and stands by what he believes in.

Academically, he is a force to reckon with while his family pedigree in Ibadanland is worthy of note.

With all these qualities combined with my own structure as an Experienced Politician and a one time Governor of this State, our administration under the banner of Action Democratic Party will be the best you can point at in years to come in Oyo state.

While describing the recent announcement of an executive travel ban on about 50 high profile Nigerians with his name on the list, Otunba Alao-Akala said it is normal for government to carry out its responsibilities as pr