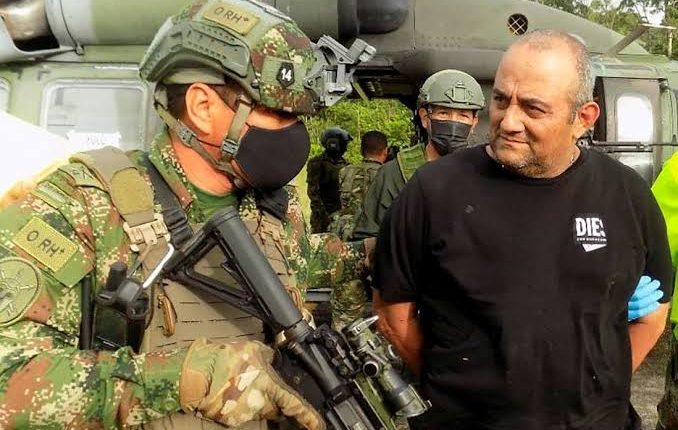 Dairo Antonio Usuga was captured in a jungle raid involving 500 police personnel and 22 helicopters. President Ivan Duque compared it to the fall of Pablo Escobar.

Usuga, better known by his alias “Otoniel,” is the alleged leader of the violent Clan Del Golfo cartel, which had control of major cocaine smuggling routes through thick jungles.

Compared to capture of Escobar

Colombia’s President Ivan Duque compared Saturday’s arrest to the fall of Pablo Escobar, the Colombian drug lord killed in a police shootout in 1993.

“This the hardest blow… to drug trafficking this century in our country,” Duque said.

“Alias Otoniel was the most feared drug lord in the world, a murderer of police, soldiers and local activists,” he added.

The arrest was “the biggest penetration of the jungle ever seen in the military history of our country,” Duque said.

Duque urged other members of the cartel to turn themselves in or “feel the full weight of the law.”

Usuga stands accused of various crimes, including drug trafficking, murder, extortion, kidnapping, conspiracy and illegal recruiting of minors. He was on the US Drug Enforcement Administration’s most wanted list.

The US State Department had offered up to $5 million (€4.29 million) for information leading to his arrest or conviction in 2009. US and British authorities were also informed about the details of the arrest.

Who is ‘Otoniel’ Usuga?

The 50-year-old was born in Necocli and was the seventh of nine children to a rural family. At age 18, he joined a Marxist guerilla group that was later disbanded.

In the 90s, he aligned himself with the Peasant Self-Defenders of Cordoba and Uraba (ACCU), which worked to protect farmers against guerillas, and was also linked to drug trafficking . Some of these paramilitary groups then became the Gulf clan.

Usuga took over the leadership of the clan from his brother, who was killed by the police in 2012.

He evaded arrest for many years. During this operation, about 500 police officers and 22 helicopters were deployed.