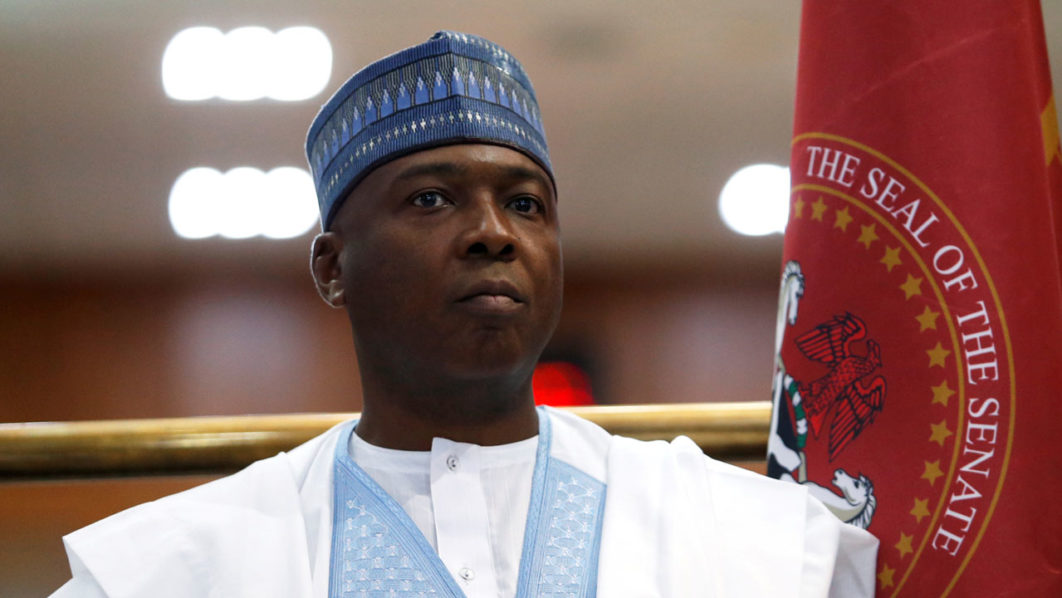 Oshiomole has no moral right to remain in politics, after bribery allegations – Saraki

The National chairman of the ruling All Progressives Congress (APC) Adams Oshiomhole, has no moral right to remain in politics following allegations of kickbacks levelled against him, Senate President Bukola Saraki has said.

Since his defection to the opposition PDP, Mr Saraki has been in a battle with Mr Oshiomhole who at several times called for his resignation as Senate President.

While speaking with journalists in Ilorin on the sidelines of the sixth remembrance prayer for his late father, Olusola Saraki, on Tuesday, Mr Saraki said the APC chairman has no locus standi to talk about morality in today’s Nigeria politics in view of controversial roles he played in the APC primaries.

“That must be a joke coming from Oshiomhole talking about moral ground. I think Oshiomhole has no locus standi to talk about morality today,” the Senate President was quoted as saying by Vanguard newspaper.

“Oshiomhole is somebody, who has been told to have been collecting not even naira but dollars from candidates and he is being accused by his party’s aspirants and Governors.

“I don’t think he has any moral ground, even to continue to be in politics not to talk about being a Chairman of a party.

“I remember in those days even Oyegun, they never accused him of something like this. I have left that party. I’m sure the President, based on integrity, knows the right thing to do. So, on moral ground, he cannot speak on moral ground.”

He said,”You see, the mistake we sometimes make, we forget that Nigeria is a big nation in this global world, not only in the context of Africa. We provide leadership. An action that we take that tries to suggest that we are not civilised with rule of law and processes, doesn’t augur well with the image. Today, the President is the President of ECOWAS likewise the Chairman of INEC as chairman of electoral bodies in Ecowas, even show that we are a responsible country.

“So, when the Inspector General of Police (IG) begins to do things like this without following due process, it is not good for our country. And that is what we always stand for. And all those who supposed to caution him should ensure that due process is followed in thing like this.

“We have been doing bye- election here, I have never seen where the Divisional Police Officers (DPOs), are being transferred. We have been doing bye-elections here, I have never seen where 200 or 300 security personnel are being deployed. It is not about Kwara, it is about the country. It is about how the world sees us. It is about how we provide leadership in the continent. And we keep on saying that people like these are not doing the President any good. The people at the end of the day will speak, and they should allow people to exercise their rights, vote in peace and vote their wishes and should not do anything that create fear or break law and order.

“In spite of all these, I see PDP winning the election because we are on ground. There is no doubt about it. If you go round, you will know who is on ground. And you will see that in the results. They should allow people to exercise their rights”, he said.

Meanwhile, some protesters on Wednesday stormed the headquarters of the Independent Corrupt Practices and other related offences Commission (ICPC) in Abuja to demand an investigation into allegations of bribery levelled against Mr Oshiomhole during the recently concluded nationwide primary elections of the party.

The protesters who were led by Stanley Onu under the auspices of Coalition for a New Nigeria said the protest was in their “quest to arrest the dangers faced by our party, the governing All Progressives Congress, APC, occasioned by the integrity challenged National Chairman, Mr. Adams Oshiomhole”.

They carried placards with several inscriptions such as ‘Oshiomhole must go’, ‘Probe Oshiomhole now’, among others.

Mr Onu said, “It is expedient that a man that has corruption noose round his neck is not the fit and proper person to lead a party that has President Muhammadu Buhari, a man known globally for his anti-corruption stance, to remain in office.

“We demand that Mr. Oshiomhole resigns owing to the plethora of allegations against him leading to even the DSS inviting him and demanding for his resignation.”

Addressing the protesters, spokesperson of the commission, Rasheedat Okoduwa, said the ICPC would look into all petitions before it, giving precedence to the time of filing.

APC member in Jigawa State electrocuted while hoisting a banner of President Mohammadu Buhari and Governor Mohammad Badaru on an electric pole.