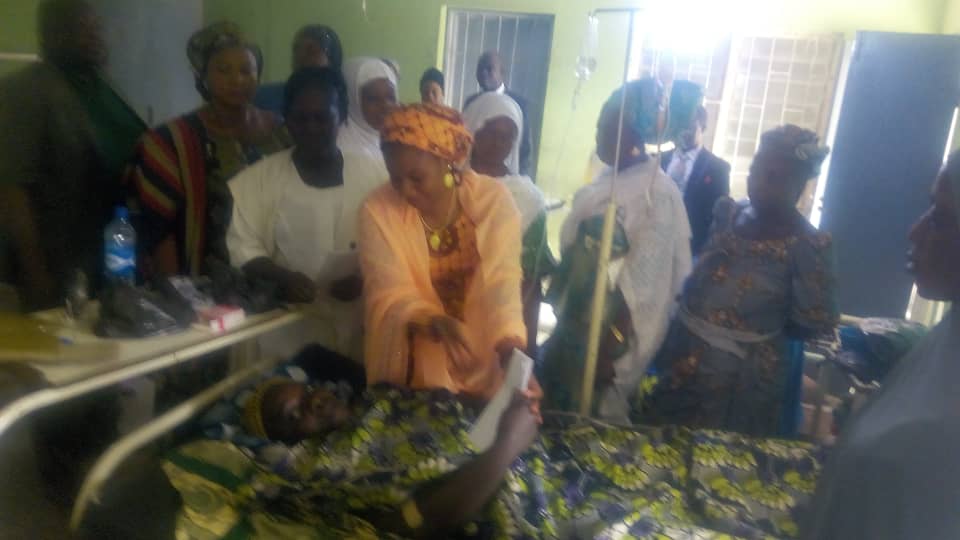 The wife of the caretaker chairman of Oorelope local government council, Honorable Adesola Yaqub aka Tasoolo who was inaugurated into office last month alongside 67 others by the executive governor of Oyo state, Engr Seyi Makinde, has commenced the new year on a flying note by emulating the philanthropic lifestyle of the first lady of Oyo state, Mrs Tamunominimi Makinde by randomly visiting hospitals in Oorelope on January 1 and gifting new year babies and their families with cash and other supportive items such as baby wears, toiletries, pampers etc.

The wife of the caretaker chairman, Mrs. Maimuna Umar Titilope-Yaqub who was in company of top officials and PDP faithfuls from the local government made the unscheduled visit to the hospitals which were randomly selected.

When contacted on phone by Sunrise Bulletin correspondent over the move she stated that it was important to reach out to others in the spirit of the season and noted that the essence of local government administration is to reach out more closely with people at the grassroots in other to give them every sense of belonging.

Mrs. Maimuna Titilope-Yaqub who is a graduate of microbiology from the University of Jos said that one of her passion is seeing people around her living happy and it was imperative to support and put smiles on the faces of families of the new year babies who according to her might have exhausted their finances in the whole process of anti-natal and post-natal adding that such is the precedent that the governor and his wife has laid down for all to follow.

She stated further that the she has for a long time been a keen admirer of the first lady of Oyo state following her motherly and leadership role in the scheme of things in the state and hope to imbibe such qualities as wife of the new chairman in the local government adding that it is a thing of immeasurable joy to find herself in a position where she can exemplify all she has learned from the first family.

The soft spoken wife of the chairman who was warmly received by members of staffs of the medical facilities, expressed her joy and satisfaction with the manner of dedication to work as exhibited by the workers and charged them to shun non chalant attitude in the discharge of their duties and endeavor to improve in all fronts both individually and collectively. She also commended the governor for Engr Seyi Makinde for his effort at improving health facilities in the state.