As part of efforts by the Executive Chairman of Oluwole Local Government, Honourable Olaide Popoola Settle, in a move to devise strategic means to curb crime in the local government area, has convened a Special Security Summit yesterday in a order to explore traditional means to cart a new course to improved on security in the area.

The summit was described by the council boss as ‘complimentary’ to efforts of the state Governor, Seyi Makinde, at the grassroots in stemming the tides of growing concerns on insecurity in the state.

Speaking to Sunrisebulletin over the security summit which held at the local government Secretariat, Idi-Ayunre on Thursday 10th of June, the Council boss maintained that it became imperative to urgently convene the meeting with heads of all security operatives, traditional rulers, hunters, farmers, associations of market operators, interest groups, and other critical stakeholders as a proactive measure in the fight against banditry, kidnapping, and other crimes. 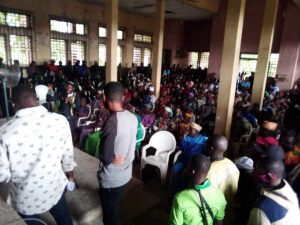 Sunrisebulletin gathered that some gunmen suspected to be Fulani bandits according to one of the escaped victims who secured gunshot wound on one of his arms as seen in a viral video said that the assailants laid ambush in the bush along Ibadan-Ijebu Ode road at the Oyo-Ogun border.

The bandits reportedly attacked the victim and others playing the road on Wednesday at about 8am of June 9 while they drove towards Ijebu-ode.

The viral video which raised apprehension among some residents in Ibadan metropolis however, gave urgent need to the security summit in order to secure the local government from external aggression or attack.

“Immediately it was brought to my notice of the abduction of 5 people at Onipe junction of Ijebu-Ode/ Ibadan Expressway, I immediately swung into action along with the local hunters, Amotekun, Agbekoya, OPC and men of the Nigeria Police in which one person was rescued alive from the kidnappers while a man who escaped with gunshot wound from the kidnappers was taken to an undisclosed hospital where I paid him a visit and offered necessary assistance, and we pray for his quick recovery while we strategize on how to nip the situation in the bud.

“Though, security power is exclusively reserved for the federal government as provided for by the constitution of federal republic of Nigeria.

“However, the question then is how many market men and women, how many Iya alamalas, how many Okada riders, how many villagers, how many farmers within our localities understand Nigeria Constitutional arrangements as an impediments in the discharge of our duties and responsibilities whenever we are confronted with security challenges in our various communities?

“This however, inform the reason why we deemed it fit to organize the SECURITY SUMMIT tagged ‘Exploring Local Intelligence In Policing Oluwole Local Government,” Hon. Settle said.

Others are the Directors of NCDC, DSS, Liaison Officer of NDLEA, Nigerian Immigration Service, Representative of Christian Association of Nigeria (CAN), League Of Imams and Alfas, Traditional rulers, Herbal Practitioners.

Hon. Settle also noted that Integration apparoach was explored during the meeting with the view to harmonizing all ideas together in order to identify how native intelligence could be explored maximally to provide adequate security.