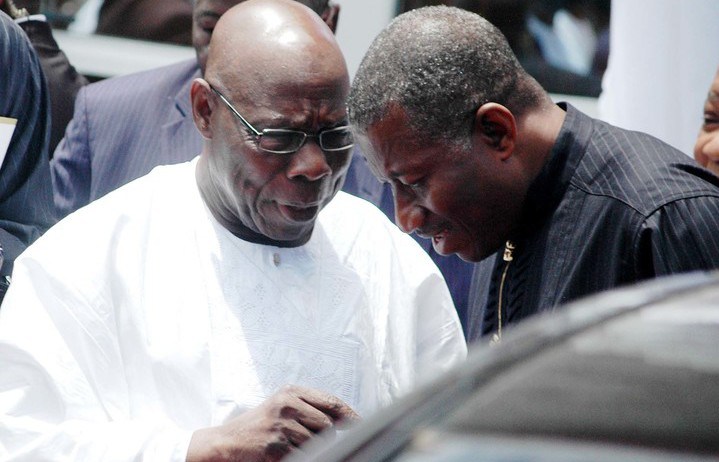 Former Presidents Olusegun Obasanjo and Goodluck Jonathan joined some Peoples Democratic Party governors to visit the palace of Lamido of Adamawa in Yola on Sunday.

Those present at the meeting said Mr Obasanjo showered praises on Atiku Abubakar, his previously estranged vice president with whom he had reconciled since becoming the candidate of Nigeria’s main opposition party for the 2019 presidential election.

Mr Obasanjo, president between 1999 and 2007, reportedly recounted his ordeal at the Yola Prisons following his incarceration by the military junta of Sani Abacha in the 1990s.

Mr Obasanjo said Yola Prisons and the Lamido’s palace were only separated by a wall. It was a remarkable moment, said Paul Ibe, a spokesperson for Mr Abubakar who was present at the event.

Mr Ibe told PREMIUM TIMES Mr Obasanjo assured the Lamido of Adamawa that Mr Abubakar would not disappoint “when he becomes president” in 2019.

“He said Atiku Abubakar would do his job with dignity, integrity and honour,” Mr Ibe said.

Shortly after the meeting, Messrs Obasanjo, Jonathan and Abubakar then rode in the same bus with some governors to the home of Mr Abubakar for lunch, it was learnt.