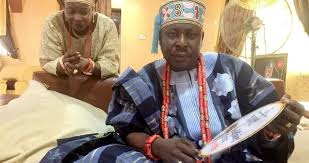 Until his death at age 62, the late monarch was the 28th Aseyin of Iseyinland and reigned for 15 years on the throne.

A family source disclosed that the monarch died on sunday morning at the University College Hospital, where he has been for months.

He was runoured to have died on feb 10 2022, but the palace denied the information and urge the public to disregard it.

Ealier, the Soun of Ogbomoso, Oba Jimoh Ajagungbade Oyewumi died in December 2021, followed by the Olubadan of Ibadan, Oba Saliu Adetunji, and the Alaafin of Oyo, Oba Lamidi Adeyemi, who, respectively, joined their ancestors, as the Yoruba customarily say when a monarch dies, in January and April 2022.

Oba Ganiyy Adekunle was born into the family of late Pa Salau Atanda Oloogunebi of Iseyin about years ago in Iseyin, Oyo state.

In November 2006, the ambitious Abdul Ganiyy Adekunle Salaudeen was selected to become the Aseyin of Iseyin to occupy the sacred Aseyin throne as the 28th monarch of Iseyinland.

However, as at the time of filing this report, the exact age of the late monarch could not be ascertained.