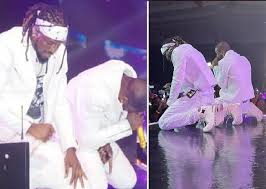 Music stars Peter and Paul Okoye had their first major concert in Lagos, Nigeria for the first time since their split from the P-Square music group.

The much-anticipated concert went down on Saturday, December 25 at the popular Eko Convention Centre and it was indeed a fun-filled night for attendees.

Many who gathered to watch the brothers perform had not seen them together for so long and it brought back a strong feeling of nostalgia to see them united again through music.

Interestingly, the brothers didn’t just carry on with their performances without acknowledging the pain of their supporters who spent so long clamouring for their reunion.

Midway into the show, Peter and Paul went down on their knees and asked fans all over the world to forgive them for being apart for so long.

Members of the audience went wild with excitement as they watched the moment many have described as priceless unfold.