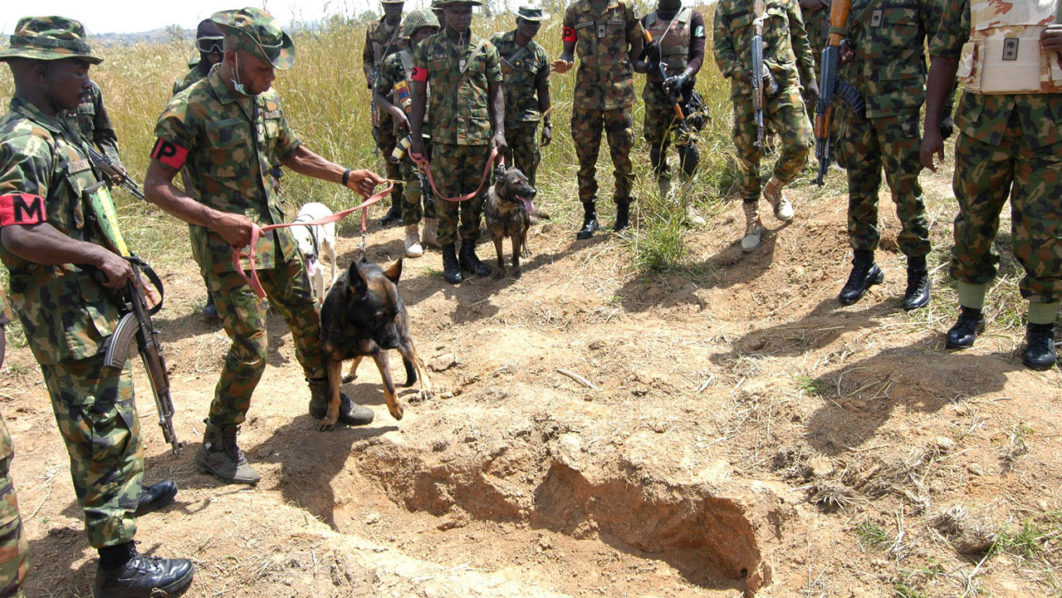 Nigeria military discovers shallow grave, where the remains of missing general was buried

An open shallow grave where the body of the missing Maj-Gen. Idris Alkali (rtd) was allegedly buried before it was exhumed and reburied in another place has been uncovered, while a specialist who facilitated the act along with others has been apprehended.

This is as a result of the military’s intensified efforts to unravel the whereabouts of the missing General whose vehicle was discovered in a mining pit in Dura –Du village in Jos South local government area of Plateau State.

Alkali, who is the immediate past Chief of Administration (Army), recently disengaged from the Nigerian Army after 35 years of meritorious service to the Nigerian Army and the country. He was travelling from Abuja to Bauchi via Jos in his black Toyota Corolla car with registration number, KWARA MUN 670 AA when some hoodlums assaulted and killed him.

Addressing journalists yesterday on the efforts to recover the body of the missing General, the General Officer Commanding 3 Armoured Division, Major General Benson Akinroluyo, said initial credible intelligence revealed that his car was stopped and he introduced himself as a general to the hoodlums who had barricaded the road that he was just passing through to Bauchi, adding that the senior officer was assaulted and killed.

“Thereafter, his belongings, such as clothing, cash, phones and laptop were shared by those who killed him. His body was dragged before being moved to somewhere else and his car was driven and pushed into the abandoned mining pit filled with water.

“The irate youths who followed his car to the abandoned mining pit filled with water on many tricycles, popularly known as “Keke NAPEP, jubilated for reasons best known to them or for mission accomplished.

“He was later buried in a shallow grave in an area popularly known as “No man’s land” within the community,” Akinroluyo explained.

The GOC narrated that when the General’s black Toyota Corolla car was recovered from the abandoned mining pit, those involved and those not involved in his killing held a meeting to relocate his body away from the community, because of the inherent danger it would attract to the community, adding that consequently, a-10-man team was constituted to relocate his body earlier buried in a shallow grave within the community to elsewhere, while a specialist in preservation of bodies was contracted and he assisted in exhuming his body from the shallow grave to somewhere else.

“Only few trusted members of the community knew where his body was relocated to. The specialist is currently in our custody.

“Again, this is an attempt to cover up the heinous crime committed by the community. There exist other evidence and indicators that pointed to the fact that those who were involved in the killing of the senior officer are being supported and backed by community leaders within the Dura-Du District.”

He further disclosed that Da Chuwang Samuel, believed to have masterminded the assaults and killing of Alkali, Nyam Samuel, Pam Gyang, Mathew Wrang, Moses Gyang, Timothy Chuang, Yakubu Rap, the district head of Dura Du village, and Chuwang Istifanus have been declared wanted by the relevant authorities based on their degree of culpability in the killing of the senior officer.

“That was the only grave we were led to by different people and sniffer dogs. We did not go to any other grave, as the operation was carried out based on credible intelligence.

“Like I always say, the cordon and search operation is intelligence-driven and that is why the operation has been conducted in line with international best practices and respect for human rights. This further explains why the Division did not clamp down on the entire community; only the perpetrators are being targeted.”

He reiterated that all the actors involved in the dastardly act who are still at large are known to the military, while all efforts were being made to get them arrested and brought to justice, as their photographs and personal details were with the relevant security agencies.

The GOC added that the military operation has really exposed the heinous crimes being committed by the few, but fully supported and concealed by the entire community and commended members of the public for their cooperation and still solicited for anyone with credible information on where the senior officer was reburied.

Akinroluyo further pointed out that relations of those whose vehicles were discovered in the mining pit had come up to identify the vehicles with proven evidence.

Speaking with journalists, one Mohammed Sadiq Abdulahi, whose father owned the Toyota bus that was found in the mining pit, said his father was ambushed in the area in July this year and killed, while another person, Yusuf Abubakar, also identified another Range Rover belonging to his uncle, Alhaji Lawal Isa.

We will only withdraw case from court, if our concerns are well addressed- Oyo ADC guber aspirants.