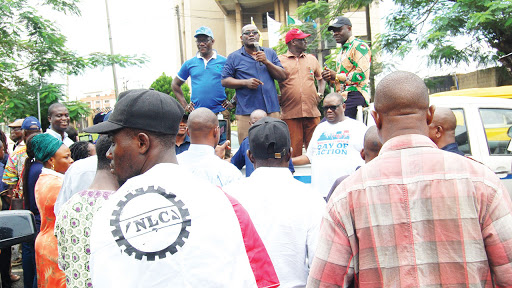 Speaking on behalf of the movement in Abuja yesterday, the president of the Nigeria Labour Congress (NLC), Ayuba Wabba, said: “We have received a firm and formal invitation to a reconvened meeting of the tripartite committee scheduled for October 4 and 5, 2018.

We demand that this shall be the final session of the committee and that a final report will be submitted to Mr. President immediately.

“In order to avail the committee the necessary environment to hold this crucial meeting and conclude its work, organised labour has, after obtaining the mandate of their necessary organs, decided to suspend the strike action with effect from today, Sunday, September 30, 2018.”

On his part, Issa Aremu, a member of the NLC National Executive Council (NEC) and Labour Party gubernatorial candidate in Kwara State, lamented the negative impact of the devaluation of the naira on salaries.

Today, with massive devaluation of the naira, N18,000 minimum wage is about $50.

There is no way Nigeria can get out of serious economic crisis with this miserably pay package,” he said.

He added: “In this economy, we all know what legislators cart away, even as we try to borrow to finance the economy.

I think that despite the crisis we have in this country, there is enough to service the need of the majority of our people but certainly not the greed of a very few.

“In the United Kingdom, which started its minimum wage in 1988 – that is clear seven years after Nigeria began hers in 1981 – there is a procedure for review without any noise made about it, because there are parameters that are put in place to review it periodically, unlike the struggle we embark upon here whenever negotiation is due.”

This was as the Socio-Economic Rights and Accountability Project (SERAP) called on Buhari to boost the recovery of stolen money to finance the new minimum wage.

In a statement yesterday, SERAP’s deputy director, Timothy Adewale, said: “Buhari, only last week in the U.S., described the working poor and ordinary Nigerians as his constituency.

He now has to provide bold leadership to improve conditions for this marginalised sector of the population by publicly supporting a just remuneration for Nigerian workers to allow them lead a decent life.

Adebayo Adelabu Is Oyo APC Governorship Candidate, as other aspirants steps Down.