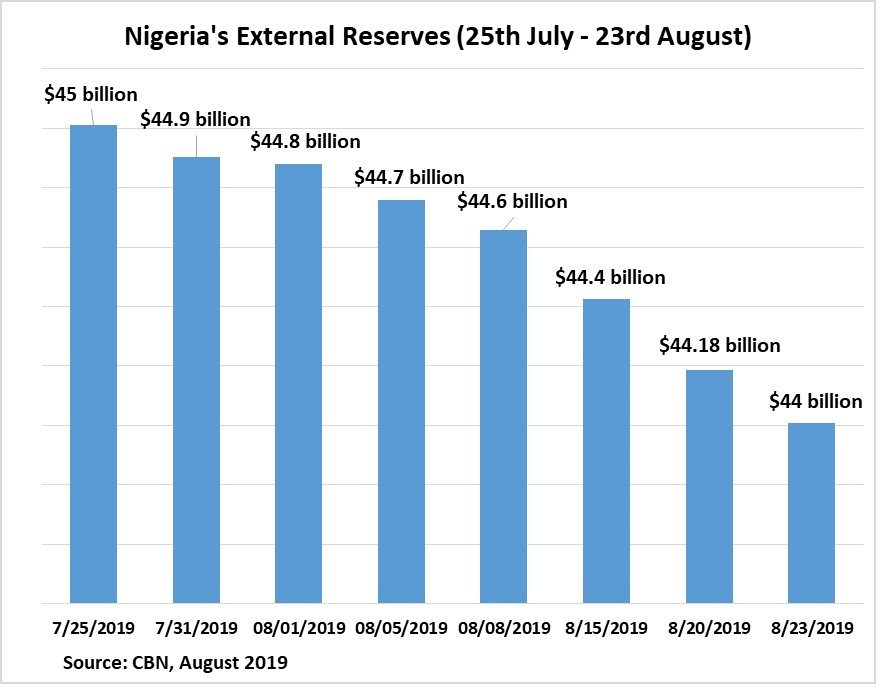 Nigeria’s foreign reserves depleted by $1 billion in August 2019. This is reflected in the data published on the website of the Central Bank of Nigeria (CBN).

According to the data obtained from the apex bank’s website, Nigeria’s foreign reserves stood at $45 billion on the 25th of July 2019, while the figure has recorded a decrease and stood at $44 billion as of 23rd August 2019.

A closer look: Nigeria’s foreign reserves crossed the $45 billion thresholds in May 2019. Hence, the reserves had built significantly until the recent free fall.

• The latest drop is the biggest of Nigeria’s foreign reserves in 17 months.

• Nairametrics had equally published in its recent articles that the country’s reserves have been falling in recent weeks.

• On August 7th, a report by Nariametricsestablished the external reserves fell by $327 million in less than four weeks.

The reasons: While this is a major concern for the Nigerian economy, possible factors that must have triggered this big fall include the big drop in oil price, rise in the importation, CBN intervention foreign exchange windows among others.

• For instance, Brent oil price currently hovers around $50 a barrel, as trade tension between the U.S and China intensifies.

• As at the time of filing this report, data from oilprice.com shows that bent crude oil price closed at $58.3 a barrel on Tuesday.

• An earlier report showed that the sharp drop in oil price might threaten the implementation of Nigeria’s 2019 budget that was benchmarked at $60 crude oil per barrel.

• Other factors that may be responsible include the slow down in the capital market and possibly CBN interventions in the Investors and Exporters’ window (I&E).

• Also, the growing external debt may also be frustrating the Federal Government into a financial strain.

• While Nigeria’s debt profile has become worrisome, with the declining oil price, the country’s reserves are the last resort.

Brewing Concerns: The Central Bank moves in recent times suggest that the declining foreign reserves are a major source of concern. Analysts have noted that the CBN would have to respond with policy measures to avert slump in the economy in the face of unfolding trade realities.

• The most recent policies of the CBN to conserve the country’s reserves include the planned Forex restrictions on food importation, milk and other dairy products.

• The major decline in the country’s reserves means the continuous fall in oil prices is already biting very hard and this may put the economy in a bad state.