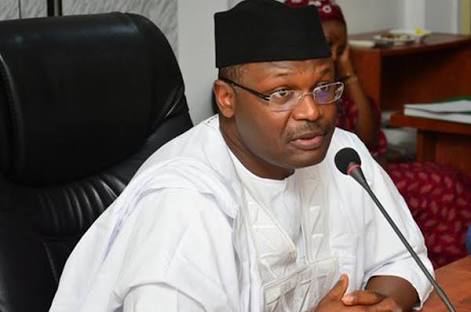 Independent National Electoral Commission, INEC has said the conclusion of declaration of the 2019 Presidential Election results would not take longer than the 2015 elections in spite of the sheer number of presidential candidates, size of the result sheets and increased voter population.This was as the commission said it has achieved a 100 percent reconfiguration of its 180, 000 smart card readers ahead of the Presidential and National Assembly Elections on Saturday.INEC Chairman, Prof. Mahmood Yakubu disclosed this in Abuja while briefing journalists on the state of preparedness of the commission for the polls.Yakubu said the commission was working to ensure that it does not keep Nigerians waiting for days without declaring the results, saying the time limit would not exceed what obtained in 2015.In 2015, while the Presidential Election held on a Saturday, a winner was not declared until the following Wednesday.

“Even though this time around we have more presidential candidates than in 2015, we have more registered voters than we had in 2015, the size of the result sheet is bigger than we had in 2015, but we are committed to concluding the process for the Presidential elections roughly about the same time that we concluded the 2015 general elections. We will do whatever we can to ensure that we speedily conclude the process but we won’t sacrifice accuracy for speed”,