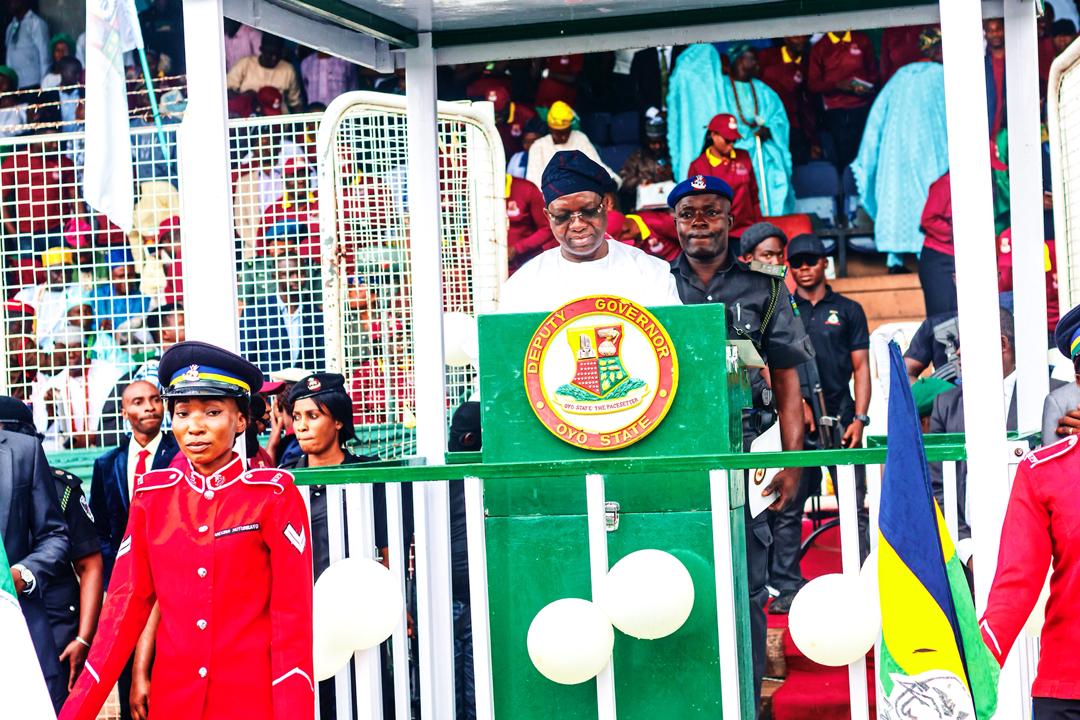 The Oyo State Governor, Engr. Seyi Makinde has charged Nigerians to  put national interest first and do away with egocentric attitudes that negates  the progress of the nation as Nigeria Celebrate 59th Independent Anniversary.

The Governor gave this charge today in his remarks at the 59th Celebration of Nigeria’s Independence, held at Adamasingba Stadium, in Ibadan.

Governor Makinde speaking through his Deputy, Engr. Rauf Olaniyan, noted that this year independent anniversary calls for sober reflections on the State and the Nation at large, adding that for Nigeria to go this far, it has been God. He stated that for the country to get its full strength, we all need to do away with egocentric attitudes that  negate the progress of the nation and put national interest priority.

Makinde revealed that it  is the grace of God that has sustained Nigeria to  experience 59th years of independence  despite series of challenges ranging from insecurity,  corruption,  unemployment  amongst other confronting the  Nation.

Speaking on it’s administration four cardinal points; Agricultural Development and its value chain, Health, Education and Secirity, Governor Makinde stated that his administration has a genuine desire to embark on aggressive strategy on mechanized agriculture and its value chain that would provide employment opportunities to ensure Oyo State turn to the food basket of the nation.

He mentioned that his administration will do everything possible to ensure a sustainable free education in the state public secondary schools.

According to Governor Makinde, “In order to achieve a greater level of educational development, we must invest in all-round development, self-reliance and self-actualization by exposing them to trainings that will assist in become patriotic and responsible citizens within the society”.

He pointed out that a nation that desires development cannot afford to make education a  priority, adding that this was why his administration canclled all fees in the public schools and also mandated 10% of the state Budget Allocation be allotted to education.

On health sector, the Governor said the state hospital, Adeoyo has been equipped with modern equipment from its derelict state within the first 100 days of his administration, adding that his administration has also commissioned Oranyan Medical Center to ensure people of the state is entitle to accessible and quality health care in the state.

The Governor therefore seek cooperation of all progressive minded people, such as Civil Servants, Artisan, Stakeholders and Politicians adding that nation development is a collective responsibility.

The event witnessed match past by  students, voluntary Youth Organizations, Unions and  Display by the State Cultural Troupe.

Nigeria@59: We Are Running A Welfarist Govt because We Want To Improve Standard Of Living in Oyo State- Gov Makinde