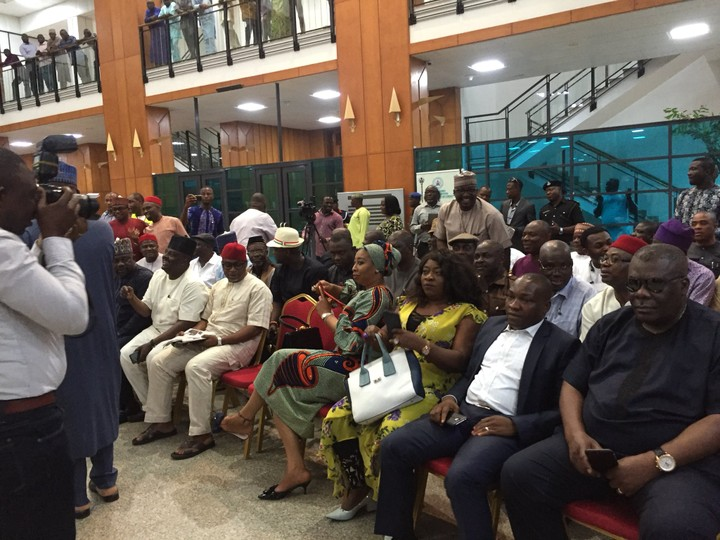 Senate President Dr Bukola Saraki has described the siege on the National assembly complex yesterday as an act of cowardice by those seeking to effect an illegal impeachment of the Senate leadership in flagrant disregard of the law, Saraki said this today at a world press conference he addressed in Abuja.
He also commended the acting President Prof. Yemi Osinbajo for handling the DSS siege at the national assembly yesterday very well, also single out for praise Hon. Boma Godhead who dared the masked operatives of the DSS to shoot her. Dr. Saraki described the forcible shutdown of the legislature as an unconscionable assault on a national institution, he thanked all who stood to ensure the failure of the siege on the National assembly.
The Senate President narrated how lawmakers and staff of the National Assembly were prevented from entering the national assembly Complex by heavily armed security agents of the Department of State Services (DSS). All entries to the Complex were blocked.” He said.
The National Assembly, the seat of democracy in Nigeria, was under lockdown. Senators and Members of the House of Representatives were prevented from gaining access.” Remarked the Senate President.
Senator Bukola noted that “The ensuing standoff was a show of shame that played itself out over several hours in full view of the country. In no circumstances should this have happened. And we as a nation reaped the bitter fruits.
The Senate President observed that the siege was orchestrated by “People who seek control at all costs, by whatever means, never minding the injury to democratic norms”. ” I have to say that this is not about me – Abubakar Bukola Saraki as an individual. It is not about Ike Ekweremadu, nor is it about Yakubu Dogara.” – am speaking for my colleagues when I say that this is about the soul of Nigeria, what we represent as a country, and our standing in the comity of nations. This is a country where so much is expected of us”
Despite the threat to our lives, we shall continue to fight impunity and injustice in this country. Happily, by the actions that Nigerians took yesterday, they demonstrated our strong resolve as a nation not to give ground to oppression.”
Dr. Bukola also noted that “The legislature, more than any other institution in this country, more than any other arm of govt. represents the will of the people. We are elected by the people, & an assault on the legislature is an assault on the people of Nigeria.”