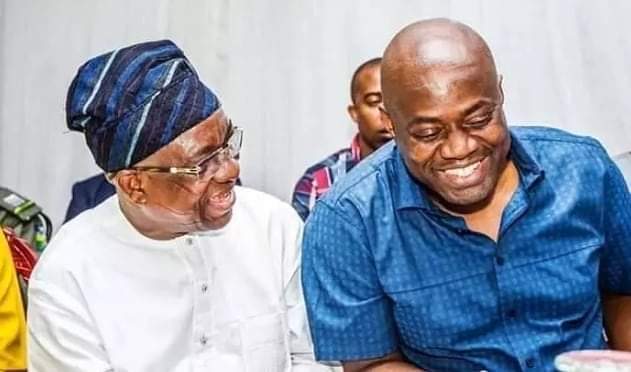 The Deputy Governor of Oyo State, Engr Rauf Olaniyan, has finally laid to rest, the speculation of rift between him and Governor of the state, Engr Seyi Makinde by declaring that the duo enjoy a robust and very cordial relationship within themselves.

Olaniyan, who described the relations between himself and his boss as very cordial, stated that he has chosen to disregard all those who wanted to cause disaffection and rancor between them because those are non existent.

The Deputy Governor spoke during a chat with journalists in the state, who were at his residence to celebrate with him on the occasion of year 2020 Ramadan celebration.

He added but for the novel pandemic which is slowing things down across the world, various innovations and efforts in the areas of education, agriculture, infrastructure and health among others have been more obvious for even the blind to see.

Olaniyan said: “For the one year in office, if the APC says we are not doing anything, fine. Let it be. The Yoruba has a saying that you can never impress your haters. But the good people of Oyo state knows that we are doing something.

“There are a lot of things going on now, if not for coronavirus, if our schools are to be up and running, as it is suppose to run, this year WAEC and JAMB, you would have seen that we are doing something. Those areas are not things you can easily see because they are intangible, at least for a while.

“If I start planning on education now, before you can see the effect, it might take sometimes. I can assure you that we are doing something. Even go to Agric, many things are not seen and they can not be seen on the pages of newspapers. Whoever is saying that we are not doing anything will wait till when he will see it, but we are doing a whole lot. There are a lot of innovation”.

“If you come to security, there are innovations. When they say we are not doing anything, we are doing something.”

When asked about insinuations his experience in public service was causing issues with some people in the Makinde government, Olaniyan said he doesn’t see the need for such.

“The relationship between myself and the governor is very cordial. But, if some people somewhere feels threatened or afraid, which I don’t even see any reason for that, that is best known to such people.

“But, to the best of my knowledge, Seyi Makinde is the Governor of Oyo state and Remi Olaniyan is the deputy governor of Oyo State.

“On my last birthday, the card Governor Makinde gave me has the inscription, ‘My Co-Pilot’, and that is it. Believe me, anybody can say whatever they like. Even at the national level, it does happen.

“At a time, they were saying that, President Busari and Vice President Osinbajo are not together. In our state, they said Seyi Makinde is not carrying along his deputy governor in governance.

He added: “Somebody told me that the rumour can be from our party, PDP and I told him that it could also be from the opposition APC. Or even from an insider. If Seyi Makinde gives me an assignment as his deputy and I didn’t carry it out, then one can say that we are not on the same page, but as the deputy Governor, it is only when the governor is not there that I can be there on his directive.

“Governance is not a straight jacket thing like people think. Everywhere all over the world you find people who want to cause disaffection. They can be here too, but as far as I am concerned, I drew up an equation and equate them to zero as not existing.

“To the best of my knowledge, we have the Governor, Engineer Seyi Makinde and myself as the deputy governor. I don’t know of any other person. So, if they are existing, and their existence will continue to cause commotion, why can’t we take them as non -existing. But, we don’t have problem between ourselves.

“People should just take things easy. And all these things are happening because there is no fund. Because the little funds we have is being competed for by so many heads. You couldn’t even imagine how we are managing to pay salary, so please bear with us.

“Those by the corner causing trouble, that’s their own work. Let them be, but we thank God that they cannot destabilise us.”

Femi Josiah: My Journey Into Politics, The Intrigues, And The Adedibu Factor