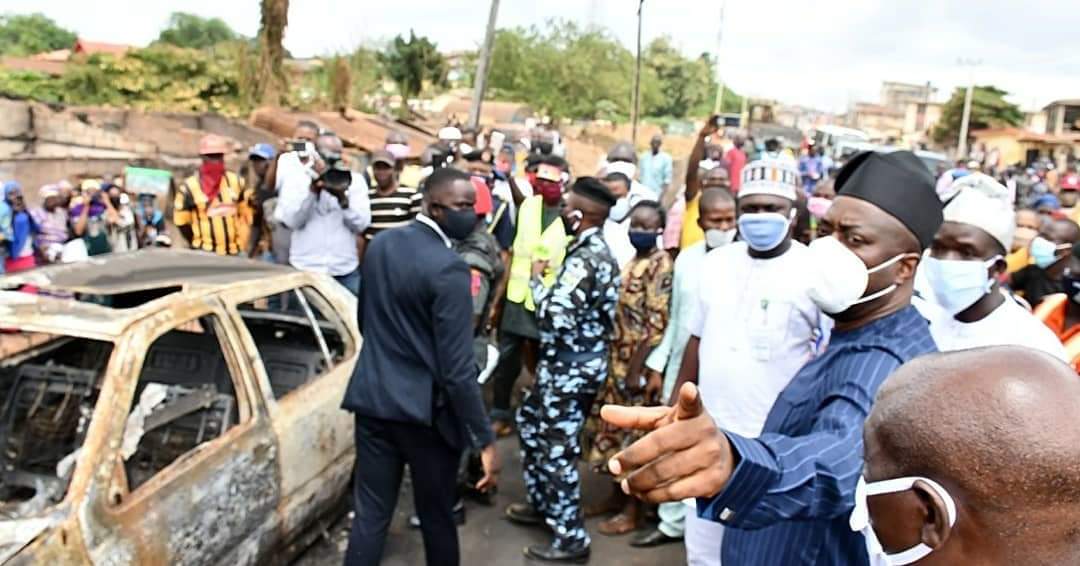 Oyo State governor, Engineer Seyi Makinde, on Monday, visited the scene of the fire incident that razed some shops at Moniya, Akinyele Local Government Area of Ibadan, the capital city of Oyo State, on Friday.

The governor, who was accompanied by the chairman of Akinyele Local Government, Hon. Hon. Taoheed Adedigba and the Chairman, State Advisory Council, Senator Hosea Agboola, among other top government functionaries, told a gathering of shop owners that the Caretaker Chairman, Hon. Adedigba, had been directed to re-build the shops that were gutted by fire.

A statement by the Chief Press Secretary to the governor, Mr. Taiwo Adisa, indicated that Makinde, while commiserating with the victims of the Moniya inferno, pledged to allocate the new shops to the old owners when completed.
“The local government will rebuild the shops here and after they are done, they will allocate the new shops to those whose shops were burnt,” he said.

The governor also described the inferno as an unfortunate and a heartbreaking incident, further assuring that the State Government would find ways of assisting the victims that were affected by the inferno so as to cushion the effects of the terrible incident.
He said: “I want to assure you that they will prepare a list, take down your names and we will, as a matter of urgency, see what we can do immediately to cushion the effect of the terrible fire incident.

“We are not mocking those who lost their lives to the fire incident but we must understand the fact that we need to be thankful in every situation. God understands whatever happens to a man, whether good or bad.
“I understand what you must be going through, especially in a moment like this. Please, I urge you to wipe your tears.”