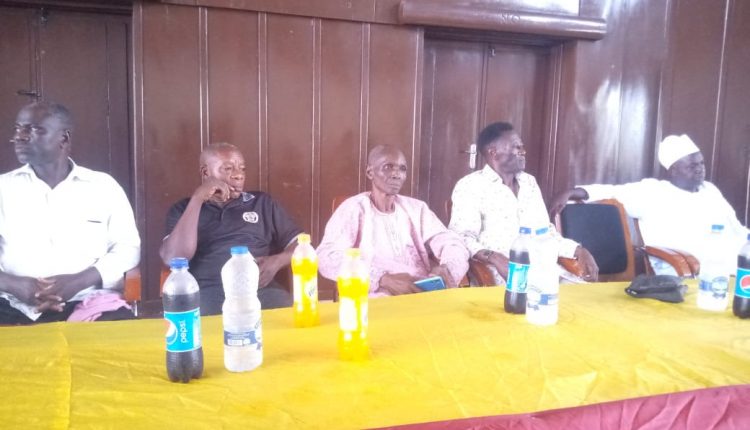 The Nigerian Association of Refuse Contractors, Oyo State chapter on Tuesday broke its silence over the situation of wastes and refuse dumps littering almost every major roads in Ibadan saying that the end result of a protracted crisis which the Seyi Makinde government inherited from the last administration was what people were reacting to not the root cause of what birthed the crisis.

The Association which just elected its state executives members maintained that the Seyi Makinde-led Government inherited an unresolved waste collection and management crisis from the last administration which became a big issue towards the twilight of the late Abiola Ajimobi led government.

Speaking with journalists during a one day sensitization meeting of the Association held at the House of Chiefs, Oyo State House of Assembly premises, Secretariat, Ibadan, on Tuesday November 16, the President, Oyo State chapter of the Association, Mr Jimoh Temitope Jayeola, who spoke in both English and Yoruba languages, said the association has already reached an understanding and agreement with the state government over waste collection and revenue generation.

He noted that the protracted Oyo State waste collection and management crisis began during the second term of late Abiola Ajimobi, who he said priotized money to be generated as revenue above environmental sanitation and public health by introducing a consultant that grossly distorted a well organized arrangement during the late governor’s first term which he said earned late Ajimobi the Chieftaincy title of Atunluto of Ibadanland from late Olubadan of Ibadanland, Oba Samuel Odulana Odugade 1. 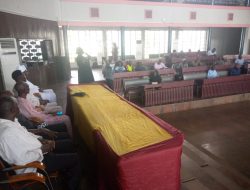 According to Mr Jayeola, waste collectors in the state became perplexed when late governor Ajimobi changed towards the waste association comprising of over 200 members across the state which he said worked with passion and commitment for the neatness of Ibadan and the state at large shortly after the former governor’s swearing-in for second term of office.

He said: “Today I am speaking on behalf of refuse collectors association of Nigeria, Oyo State chapter. First of all, our meeting today is for the purpose of complimenting efforts of the Oyo State Governor and the present administration in ensuring a clean and healthy environment.

“We have held series of meetings with the government because we realized that the dirts in the city of Ibadan in particular is of serious concern to the government. We can actually see that since the inception of this government, Seyi Makinde is the first and only sitting Governor, who went all out in the middle of the night alongside other top government officials on waste collection from our streets and disposal.

“We also realized the need to put our heads together to forge a common front in order to achieve a cleaner and healthier environment which was why we are gathered here today as an association to cart a way forward after our agreement with the state government through the state ministry of environment.”

Asked about what the people of Oyo state should expect after the association’s Tuesday meeting, Jayeola said his members are more determined and resolved to fully return to work immediately noting that the state government has also put certain maesures in place to make the job easier for his association such as full enforcement of relevant environmental sanitation laws including every house owning a waste bin across the state.

“Actually, we are the same people that worked for the last governor, late governor Ajimobi to an extent of getting a Chieftaincy title from our late King, the late Olubadan of Ibadanland. But later after successful completion of his first tenure, the late governor suddenly changed towards us, perhaps, it was for the purpose of money to be made from internally generated revenue.

“He then introduced a new consultant to us alleging us of not doing well and all the programs that worked to earn him the chieftaincy title was distorted. We have about two hundred and fifty waste collectors but the new consultant then, compressed our numbers by reducing waste collectors to only about seventy for the whole of Ibadan, the largest city in Africa. To us that’s not possible!

“There’s no way this number of waste collectors could capture all areas street by street and neighborhood by neighborhood. Such situation will surely lead to people taking their refuse to dump in the canals, streams, river, or even the main roads since waste would probably have piled up without collection.

“After former governor Ajimobi was sworn in for second term, he told us that they have introduced a consultant to him and the state IGR will go up. The consultant in turn also didn’t care about anything else than how to make money. He said anyone who was not capable should leave but in this job it is never about capacity alone.

“In this job, we have people who are working very hard but still don’t have route allocated to them. There are others who have trucks for hiring but don’t collect waste themselves so, it becomes a collaborative venture in which those without trucks for financial reasons collaborate with truck owners on agreed terms and conditions. It may be difficult to see one person have everything.” Jayeola said.

Speaking earlier, the vice president of the Association in Oyo state, Mrs Tolulope Badmus, in her remark said was appalled by the way and manner refuse has taken over major roads and streets of Ibadan in recent times saying that it was due to a long period of engagement between government and the association adding that the waste collectors association has resolved to put an end to the menace.

“We have done everything within our capacity to ensure our meetings with the state government births a new era and we are very happy that Governor Seyi Makinde being a very listening governor and leader with the right priorities in place has reached an agreement with us through the ministry of environment. Ours is to from now on swing into action and make sure Ibadan becomes clean and conducive for all residents.” Mrs Badmus noted.